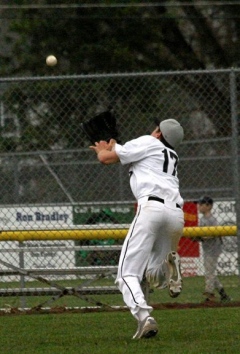 ATHENS - Athens used an early offensive explosion to beat Williamson 7-5 in NTL cross-over baseball action Friday. The game was called after 5 1/2-innings due to rain but they played enough to count it as a full game.

Athens scored five in the first inning then added two more in the second to take a 7-0 lead. Williamson came back in the top of the third, scoring five runs but the Wildcats held them after that.

Curt Moore had three hits for the Wildcats, including a double, with 2-RBI while Stag Shadduck added two hits with a run scored.

Nick Vosburg, Craig Moore, Mike Estes and Neil Carpenter had a double each while Jake Shaffer added a single.

Kyle Colegrove and Hunter Huyett had two doubles each to lead Williamson while Logan Everett added a single.

Athens (4-2) will travel to Wellsboro Monday.

Hunter Thomas threw a four hitter as the Crusaders picked up another IAC baseball win Friday.

He also struck out four while allowing four hits and one walk.

Boyles and Carson each scored twice while Thomas, Martin, May and Marshall also crossed home. May had 2-RBI while Boyles and Martin also knocked runners in.

Hunter Burgmark had a double for SVE while Jesse Tillotson scores the loss.

The Crusaders host Dryden today at noon in a non-league match-up.