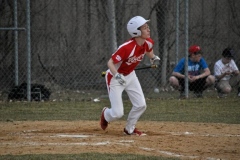 Down a run heading into the seventh inning, the Athens Wildcats got on the board against Wyalusing in that inning and then scored five runs in the eighth to come away with a 6-1 victory in eight innings.

Andrew Pickett kept the Wildcats off the board until the seventh, but Curt Moore, Neil Carpenter, Stag Shadduck, Mike Estes, Sam Perri and Nick Vosburg all scored runs for Athens in the game.

Pickett pitched seven innings for the Rams, striking out nine, walking three and allowing four hits and one earned run.

Athens pounded out five runs in the eighth inning off Cody Pickett and Kyle Tinna.

Curt Moore kept Athens in the game early, striking out seven, walking two and allowing one hit and one unearned run in five innings for the Wildcats.

Tyler Forbes closed out the game for Athens.

Moore, Carpenter, Shadduck, Estes and Zach Firestine each had a hit in the game and Vosburg had two hits for the Wildcats.

Cody Pickett had two hits for Wyalusing and Andrew Pickett had one. Isaac Bennett scored the Rams run.

Wyalusing is at Sayre on Wednesday.

The Panthers got a hit and four runs scored from Aaron Pifer and Dylan Saxon had two hits and scored a run in the win.

James Zajac had a hit and scored a run and Ben Abell had two hits in the game.

Dylan Chapman scored a run and Bryan Ford had a hit.

The Panthers drew eight walks in the win.

Nick Skerpon had three hits, with a triple for Sayre. Skerpon scored two runs in the game.

Cuyler Kochin had a hit and Dave Mendola and Marshall Felt each had two hits in the game, while JP Harbst had a double.

Hall started for Sayre on the mound, while Zajac went the distance for the Panthers, striking out eight.

WAVERLY, N.Y. - Alex Uhl and Kyle Kuzma limited the Senecas to two runs and four hits in the victory on Monday night.

Uhl struck out one, walked two and allowed two hits and one unearned run in three innings.

Kuzma struck out three, walked three and allowed two hits and one unearned run in four innings of work.

Cody Marchese, Dylan Perry and Zach Saxon had two hits each in the victory.

Saxon had a double and an RBI and Marchese scored two runs, while Perry scored ar un and had a triple in the game.

Anthony Girolamo had a hit, an RBI and a run scored and Matt McCabe had a hit.

Brady Bond had a two hit day for Watkins Glen in the loss.

ELMIRA HEIGHTS, N.Y. - The Tigers built a 7-0 lead after three innings, but Edison scored at least one run in every inning, starting with the bottom of the third, to rally for the victory.

Ryan Vergason had three hits for Tioga, with a run scored and Jake Howland had a hit and scored a run.

Peter Simmons had two hits and an RBI, Carter Jackson had a hit, a run scored and an RBI, and Jesse Manuel had a hit and two runs scored.

Travis Moyer scored a run, Zach Baker had an RBI and scored two runs and Adam Perry had a run scored and an RBI.

Dylan Bellinger and Adam Shumacher each had three hits for Edison. Bellinger had a two-run home run and three RBI and Shumacher had two RBI and scored two runs.

Bellinger started for Edison, followed by Make Bahantka and Brandon Mishaud, who got the win.

Tioga is at Notre Dame on Wednesday.

Dylan Prough had a game-winning walk-off hit in the bottom of the seventh to lift the Green Hornets to the win.

Prough had a hit, scored two runs and had two RBI in the game.

Connor Coolidge worked 1 1/3 innings on the mound for Wellsboro and Matt Reese had 4 2/3 innings of work, while Brandon Owlett pitched one inning.

Taylor Hillson and Bo Burleigh each had two hits for Mansfield. Hillson scored two runs and Burleigh had an RBI and scored a run. Sam Rotella had a hit and two RBI.

Carson and Wyatt Martin each had three hits in the game, with Carson scoring two runs and Martin scoring three runs.

Martin had a double and a triple, Marshall had a triple, Pruniar and Boyles each had doubles.

"It was a great night for Aaron," Notre Dame coach Bill Hopkins said.

Notre Dame hosts Tioga in their home opener on Wednesday.

The Griffins pounded out 19 hits en route to their Heartland Conference win Monday.

Sullivan is at Millville Wednesday.