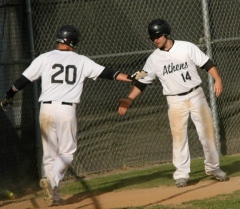 The Wildcats scored two runs in the top of the first while the Knights responded with a run in the bottom half of the inning. Athens scored three runs in the second and third innings to take a 8-1 lead. The Wildcats pushed it to 10-1 in the fourth while Towanda scored their final run in the seventh inning.

Tyler Forbes got the win, going the distance to strike out six while allowing four hits, six walks and one earned run.

Zane Vargason was 3-for-5 with two runs and 2-RBI to lead the Wildcats while Curt Moore went 2-for-3 with a run scored and an RBI.

Brandon Dinelli went 1-for-2 with a double and two runs scored for the Knights while Dylan Bates, Nick Place and Sawyer Strope also had hits. Bates and Strope knocked in the two runs as well.

Tristan James started and scored the loss, going 1 1/3-innings with two strikeouts, two walks, four hits and five runs, three of which were earned. He falls to 4-1.

"It was one of those nights," Towanda coach Bill Sexton said. "We didn't really play well in any phase of the game. Athens came and did what they wanted to do tonight."

Sexton hopes this is just another learning moment for his young squad.

With a win Towanda would have earned a share of the NTL East title but after the loss it is still up for grabs. However, the Knights have a 2 1/2-game lead over second place Athens.

Garrett Wesneski (2-for-3), Tanner Machmer (2-for-2) and Trevor Route (2-for-3) all had multiple hits in the game for Canton. Wesneski added 3-RBI, Machmer had two runs with an RBI while Route scored twice.

Emmett Watson, Connor Route and Chase Pepper had the other hits. Watson added 3-RBI with a run scored, Route had three runs scored while Pepper had an RBI.

Josiah Bardo had three walks with three runs scored, Kyle Landis scored twice while Wes Moore had a run scored and an RBI. Jacob Barrett scored once as well.

Wesneski scored the win, striking out two while allowing four walks and four runs in three innings of work. Barrett went the final two innings with two strikeouts, one walk and one run.

Kyle Colegrove and Wade Tubbs had two hits each for Williamson while Hunter Hewitt added a 2-run home run. Logan Everett had an RBI single, Troy Adriance had an RBI single and Shea Daley also had a hit.

Canton will be at CV Wednesday.

The Hornets kept pace with Canton in the NTL West with their win over the Indians Monday.

They jumped out early, scoring seven runs in the first two innings en route to the win.

Ben Shaw went 2-for-3 with two runs scored while Brian Doty was 2-for-2 with a run scored. Connor Coolidge and Matt Reese had two hits each as well.

Ryan Freeman and Jake Burrell had the two CV hits.

The Hornets remain two games back of Canton in the NTL West.

Kyle Jackson and Darton Harwick both went 3-for-3. Jackson's included a double, two runs and an RBI while Harwick had a double, RBI and run scored.

Aaron Pifer, James Zajac, Nik Geiser, Ben Abell and Brian Ford had the five Panther hits. Pifer and Zajac scored the runs while Geiser and Zajac had the RBI.

Zajac started and earns the loss, going five innings to strikeout six while allowing one walk, 10 hits and seven runs.

Geiser pitched the final two innings with one walk, four hits, four runs and one strikeout.

Northeast is at Towanda Wednesday.