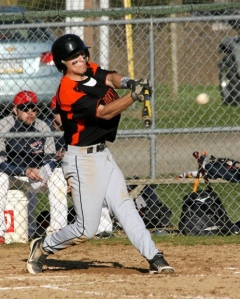 WELLSBORO - Canton got a strong combined pitching effort from Chase Pepper and Garrett Wesneski as the Warriors pulled out a 2-0 NTL West baseball win Wednesday.

Josiah Bardo hit a first inning home run to put the Warriors up 1-0 right off the bat. Then in the second inning Kyle Landis scored off a Tanner Machmer double to make 2-0.

That's where the game stayed as it turned into a pitcher's duel.

Matt Reese went the distance in the loss for Wellsboro. He struck out four while allowing seven hits, two walks and one earned run.

Despite the loss Wellsboro coach Philip Prough was pleased with his starting pitcher's performance.

"I'm very pleased with him because it gives us a good indication of his stamina," Prough said. "He can pitch deep into games without his best stuff."

He also felt they defended well.

At the plate Wesneski went 2-for-2 to lead Canton while Landis, Wes Moore and John Bowman also had hits.

Reese and Connor Coolidge had the two Hornet hits.

"He's come a long way in his pitching, in his demeanor," he said. "It's nice to see him grow up like that but on the other hand I hate it. Canton is the team to beat, I think everyone knows that. They are a solid hitting team and I think they would be the best pitching I've seen. Fundamentally they are pretty sound."

Wellsboro had chances to score but couldn't get that one clutch hit they needed.

"I am pleased knowing that we don't have all our horses," Prough said. "I look forward to playing them again."

WYSOX - In a seesaw battle the Black Knights rallied from 2-runs down in the seventh to pick up an NTL East baseball win.

"It's the way the kids came back all day," Towanda coach Bill Sexton said.

Towanda took a 2-0 lead after the first inning but a 3-run home run by Nick Skerpon in the third put the Redskins up 3-2. An Austin Markel solo shot in the third tied things up at 3-all.

In the fifth Towanda scored two runs to take a 5-3 lead.

Then in the top of the seventh Jake Wheeler reached on an error for Sayre. After back to back strikeouts Skerpon was intentionally walked. Cuyler Kochin walked to load the bases followed by David Mendola hitting a grand slam to put the Redskins up 7-5.

In the bottom half of the inning Mitch Patel led off with a single followed by Brandon Dinelli hitting his second double of the evening. With two outs Dylan Bates hit a 2-run single to knot the game at 7-all. That was followed up by Nick Place hitting his second home run in as many games to secure the 9-7 win.

"Things got out of hand in the seventh," Sexton explained. "The kids have folded but they came back and got a nice win. It's not a picture perfect ball game by any stretch of the imagination but nice to see them find a way to win."

Dinelli went 5-for-5 to lead the Knights at the plate with two doubles, three runs, a stolen base and an RBI.

"Brandon is what you want in a senior lead-off guy to do," Sexton remarked.

Place (2-for-5) and Matt Bartholomew (2-for-4) had multiple hit games as Place added the home run, 2-RBI and run scored. Bartholomew had a stolen base and scored a run.

Bates, Markel, Sawyer Strope, Tristan James and Patel had the other Towanda hits with James' a double. Jared Lines, Bates, Markel, Bartholomew and Patel all scored runs while Bates and Strope had 2-RBI each.

Skerpon had the two Sayre hits while Mendola had the only other one.

Towanda is at Athens for a make-up today.

The Tigers rallied to overcome a late deficit and pick up an NTL West baseball win Wednesday.

"It's a big win," Mansfield coach Matt Perry said. "We needed one. Hopefully it gets us rolling."

The Indians pushed the lead to 5-2 after the top of the seventh when Mansfield rattled off three straight runs to send it into extra innings.

"The guys battled back," Perry commented.

They got the winning run in the bottom of the ninth.

Bryce Zaparzynski went 3-for-4 to lead Mansfield with a run scored and 2-RBI while Taylor Hillson was 2-for-4 with two runs and an RBI.

Bo Burleigh gets the win in relief, going seven innings to strike out four while allowing three hits and one run.

Jarrod Burd started for the Tigers.

Jake Burrel went 2-for-3 for CV while Ryan Freeman went 1-for-3 with two runs scored.

Tyler Melko started for the Indians while Luke Plummer came on in relief and was tagged with the loss. They combined for eight strikeouts and five walks.

Mansfield (2-3) will travel to Towanda Friday.

The Wildcats had 21 hits as they pulled out an NTL East victory Wednesday.

Josh Mattocks (3-for-4) and Kyle Schucker (3-for-3) had multiple hit games for the Trojans while Jarrod Mattocks, Chance Lantz and Bradin Heimbach also had hits.

Murray started and was scored the loss.

WAVERLY, N.Y. - Waverly belted out 10 hits in their IAC win while the Tigers suffered nine errors in the loss.

Cody Marchese (3-for-4), Dylan Perry (2-for-4) and Matt Lee (2-for-5) had multiple hit games for the Wolverines. Marchese added four runs and an RBI, Perry scored twice with 2-RBI while Lee scored once with a run batted in.

Saxon had three runs batted in, Bronson knocked in two while Girolamo and McCabe had 1-RBI each.

Peter Simmons and Carter Jackson had the two Tioga hits.

The Ram's had a strong outing at the plate as they belted out 12 hits en route to their 11 runs.

Leading the way was Kyle Tinna's 4-for-4 performance including two doubles, 2-RBI and a run scored.

Chad Johnson (2-for-4) and Dylan Otis (2-for-3) also had multiple hits. Johnson's included a double, two runs and an RBI while Otis had 2-RBI with a run scored.

Salsman scored twice while Bennett and Andrew Pickett crossed home once. Force had an RBI as well.

Andrew Pickett went two innings to get the win, striking out one while allowing one walk. Bennett went the next inning, striking out one with four walks, one hit and one earned run followed by Dein Carr going 2 1/3-innings with three strikeouts. Otis finished out on the mound.

Cody Clark went 1-for-1 for the Panthers and also scored their only run.

Wyalusing will travel to Sayre for a 4:30 p.m. rain make-up today.

Williamson led 2-0 after the first inning but in the top of the second Canton scored 12 runs en route to their NTL West win Wednesday.

Josiah Bardo went 4-for-5 with a triple, double and three runs scored while Emmett Watson was 3-for-4 with four runs.

Kyle Landis went 3-for-3 with three runs, Chase Pepper was 3-for-5 with a double and two runs, Wes Moore and Tanner Machmer went 2-for-3. Moore had two doubles and two runs scored while Machmer scored once.

Connor Route went 1-for-2 with three walks and three runs while Trevor Route also had a hit and scored a run. Jacob Butcher crossed home as well for Canton.

Kyle Colegrove and Logan Everett scored for Williamson in the game.

The Crusaders picked up an IAC baseball win Wednesday.