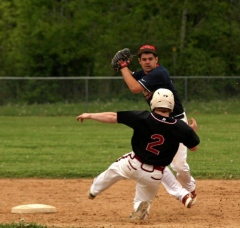 Canton used a big first inning to beat Mansfield and earn at least a share of the NTL West baseball title Friday.

The Warriors scored six in the first inning en route to their 9-5 win.

"We got off to a good start," Canton coach Bob Rockwell said.

Kyle Landis and Chase Pepper both had 2-run home runs for Canton. Landis was 2-for-2 with a run scored while Pepper was 2-for-4 with 3-RBI and two runs scored.

Pepper earned the win, going the first five innings to strike out eight while allowing three walks and no earned runs.

Wesneski went the final two with one walk and four strikeouts for the save.

Rotella started but failed to get out of the first inning. Bryce Zaparzysnki came in but left shortly as well after walking three batters. Andrews then took over and went the rest of the way.

They combined for six walks and two strikeouts.

Despite the big win Rockwell sees they still have room for improvement as they had six errors on the day.

"We have to shore up our defense," he said. "We did not play good defense tonight."

They will travel to Cowanesque Valley for a make-up today at 2 p.m. then host Wellsboro on Monday. One more win and they clinch the title outright.

"We just want to take it one game at a time," Rockwell remarked. "All we care about tomorrow is CV."

"We came to play today."

They needed this win to force a playoff with Notre Dame for their division title. The playoff will be on Monday with a 4:30 p.m. start.

In the first inning a Zach Cooney single brought home Cody Marchese and Anthomy Girolamo to put the Wolverines up 2-0. A Patric Bronson sac fly brought in Dylan Perry, followed by a Matt Lee single scoring Cooney to give Waverly a 4-0 lead.

They made it 5-0 with a run in the top of the third as a Zac Saxon single scored Perry.

Newark Valley would get two in the third then add one more in the fifth but that was the end of their rally.

Alex Uhl started and earned the win, going six innings with no strikeouts but allowed six hits, three earned runs and one walk. Bronson earns the save with three strikeouts in the final inning.

"Alex Uhl stepped up and pitched an excellent game in a big game for his young career," McDuffee said.

He was also pleased with his team's error free defense.

Marchese, Perry, Cooney, Saxon and Lee had the five hits.

Waverly will travel to Notre Dame Monday for a winner-take-all division title contest with a 4:30 p.m. start time.

The Panthers jumped out early and rallied late but it was the Wildcats holding on for the NTL East win Friday.

Northeast would fight back with three runs in the bottom half of the inning but the deficit was just too much.

Troy Stivason went 4-for-5 with a grand slam, 6-RBI and two runs scored to lead the Wildcats while Shane Vargason was 2-for-5 with two runs.

Tyler Forbes came for the next two with three strikeouts and two walks while Craig Moore pitched the rest of the way with five strikeouts, two walks, one hit and three runs.

Bryan Ford had a double with three runs and 4-RBI to lead Northeast while Aaron Pifer, Dylan Saxon, James Zajac and Nic Geiser also had hits.

The Green Hornets had two big innings at the plate to pick up this NTL West win.

They scored four in the second to take a 5-0 lead, then added six more in the fourth to secure the victory.

Chris Learn went 2-for-3 for Williamson.

SAYRE - The NTL East game between Troy and Sayre was suspended due to darkness tied at 18 in the seventh inning.

They plan on resuming the game today.