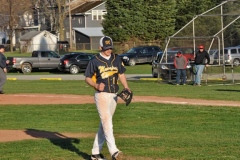 MANSFIELD - Down 7-4 going into the bottom of the fifth Mansfield tallied off four unanswered runs to beat Sayre 8-7 in NTL baseball crossover action Monday.

Bryce Zaparzynski (2-for-3), Sam Rotella (2-for-4) and Max Colegrove (2-for-3) had multiple hit games for the Tigers. Zaparzynski and Colegrove each had doubles and crossed home with Zaparzynski knocking in 2-RBI.

"We definitely came together as a team the last couple innings and were able to get it done," Hillson said.

Bryce Zaparzynski started for Mansfield, Brady Andrews relieved and Hillson closed out the game, pitching 2 2/3 shutout innings of relief for the win.

"I had a little trouble finding the zone, but I got it under control and the defense did a good job," Hillson said.

Derrick Keir went 2-for-2, with a double, and a run scored to lead Sayre while Cody Ketter and Nick Hall had hits. Kyle Lake, Nick Skerpon, David Mendola and Jake Wheeler scored the Redskin runs.

Keir scored the loss. He had 10 strikeouts while allowing eight hits and two walks.

Sayre had a chance in the seventh when Keir led off with a double, but when Marshall Felt hit a ground ball back toward Hillson, he was able to field the ball and throw out Keir at third.

"We work on getting off the mound and getting the lead runner," Hillson said.

That still left Sayre with the tying run on first and one out, but Hillson got himself out of it by picking off Felt.

"I tried to be quick with my move and it worked out," Hillson said.

For Mansfield the victory was a good way to carry the momentum from Saturday's win over Towanda.

"This win was big, we are playing good right now," Hillson said.

WELLSBORO - The Green Hornets broke open a 2-2 game in the fifth with two runs in the bottom half of that inning and another run in the sixth to get the victory.

Dawson Prough started on the mound for Wellsboro, striking out three in four innings. His brother Dylan Prough got the win with two innings of scoreless relief with two strikeouts and Brandon Owlett got the save working a scoreless inning with one strikeout.

Zane Varagson started on the mound for Athens, striking out three and Tyler Birdsall took the loss in relief.

Dylan Prough had two hits and two RBI for Wellsboro and Dawson Prough had a hit and an RBI, while Ben Shaw and Cody DeHaas each had hits.

Vargason had an RBI, Craig Moore scored a run and Nick Vosburg and Tyler Forbes each had hits.

Wellsboro is at Wyalusing on Wednesday.

Nick Place had a two homerun day to lead the Black Knights to the win.

Matt Bartholomew and Nick Innocenzo each scored runs and Austin Markel had two hits, with an RBI, while Ty Fowler had an RBI.

Sawyer Strope had three hits and two RBI, Tristan James had a hit, Tye Johnson had a hit and an RBI, Richard Benjamin had a hit, Cole Sexton scored a run and had an RBI and Matt Murphy had a hit, an RBI and a run scored.

For Place it's four home runs on the season for Towanda.

"He's been hot, and he was able to wait on pitches and stay back in the zone and he did a nice job today," Towanda coach Bill Sexton said.

Sexton was happy with the way the entire lineup hit in the game.

"I thought we went and played like we were capable of playing tonight," he said. "Our hitters were able to track pitches tonight. Markel started, striking out five, walking four, allowing one hit, hitting a batter and allowing three runs, two earned, in three innings for the win.

Place struck out four, walked two and allowed no runs or hits in two innings.

Dinelli walked a batter and hit a batter, allowing a run without getting an out and Fowler struck out two and allowed a hit and walk in a scoreless inning.

Brandon Whitesell had a double for CV and Luke Plummer scored two runs, while Brandon McClean and Nate Bonham each scored runs.

CV is at Wyalusing today.

The Warriors got four runs in the third inning to blow open the game on Monday.

The Warriors got two hits, with a run scored and an RBI, from Josiah Bardo and Emmett Watson and Tanner Machmer each had two hits, with Watson scoring three runs and Machmer getting an RBI.

Connor Route had a hit and scored a run, Kyle Landis, Wes Moore and Trevor Route all had hits, with Landis getting an RBI.

Chase Pepper had an RBI and a run scored and Garrett Wesneski had an RBI.

Lance Zimmerman had a hit, Scotty Reese had a double and Kyle Jackson scored a run.

Canton is at Northeast Bradford on Friday.

The Rams scored runs in the sixth and seventh inning to pick up the victory on Monday.

Cody Pickett had a double, an RBI and a run scored, Kyle Tinna and Devon Carr each had hits and scored a run and Shane Salsman and Dylan Otis added hits.

Hunter Huyett had a double for Williamson and Curt Heck, Dylan Gee and Troy Adriance had hits for Williamson, while Kyle Colegrove scored a run.

Shea Daly took the loss on the mound.

The Rams were 1-1 over the weekend at the Central Columbia Tournament, losing to Central 8-2, and beating Bloomsburg 11-7.

Waverly's trio of pitchers threw a one-hitter as they picked up an IAC baseball win Monday.

The Wolverines did all their damage early in the game, scoring five runs in the first two innings.

Dylan Perry started and went five innings, allowing the one hit but striking out eight with no walks. Perry was also 2-for-2 with a triple and 3-RBI at the plate.

"Dylan Perry is having a great season on the mound, at the plate and defense, too," Waverly coach Kyle McDuffee said.

Zach Cooney pitched the sixth with two walks and one strikeout while Cody Marchese threw in the seventh with four strikeouts.

Marchese (2-for-2) also had a multiple hit game for the Wolverines with a double, two runs and 2-RBI.

Montgomery got six runs in the first three innings to beat the Griffins.

Kelby Mullen led the Griffins with two hits, a double, a run scored and an RBI, and Zach Meyer, Barry Henrich and Derek Farrell all had hits. Heinrich stole a base and scored a run and Meyer had an RBI and a double.

Mullen struck out three in one scoreless inning.

Alex Worthington went the distance on the mound for Montgomery and he had a hit, while Corey Kriner had two hits, with a double and Thomas Goetz had a double for Montgomery.

Jesse Manuel struck out 15 in a three-hit shutout, walking three for the Tigers.

At the plate Jake Howland was 4-for-6 with six runs scored, six RBI and a double.

The Crusaders got three hits, with three runs scored, two doubles and three RBI from Wyatt Martin and Ridgebury's Parker May had two hits, with a double, a run scored and three RBI.