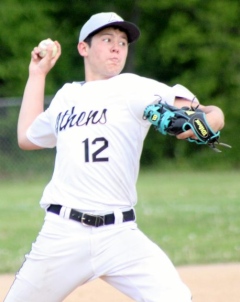 Nic Geiser went 2-for-3 with a run scored and an RBI while also getting the win on the mound. He went five innings to strike out three while allowing three walks, six hits and two runs.

Zajac earned the save, going the final two innings to strike out four with one hit.

The Wildcats finished their season with a win Friday.

Zane Vargason and Curt Moore had two hits each with one of Moore's a double to lead Athens. Vargason added a run scored and 2-RBI while Moore scored once and drove in three runs.

The run support came in support of pitching ace Kaitlyn Serfass. She fired a one-hitter for the Lady Wildcats, who wrap up the regular season at 11-7, striking out out five and walking two.

Athens took immediate control of the game with seven runs in the top of the first inning.

Mackenzie Hafer and Rica Dimon opened the game with singles and Jensen Dunkling plated the first run with an RBI single.

After a passed ball made it 2-0, Christin Dunkling singled home her sister and Serfass lined a one-out RBI double to make it 4-0.

A Lady Redskin error allowed courtesy-runner Kaitlyn Testen to score from second to push the lead to 5-0.

Later in the inning, Morgan Westbrook singled to score Kassie Winters, who had reach via an error.

Another error, this one off the bat of Hafer plated Miranda Peterson, who had walked, with the final run of the inning.

Athens tacked on two runs in the second inning on an RBI triple by Christin Dunkling, who scored on a groundout off the bat of Mackenzie Warner.

Sayre's lone hit was a two-out, bases-loaded RBI single in the fourth-inning by senior Rachel Hurley to cut the Athens lead to 14-1.

The Lady Redskins loaded the bases when Kaitlyn Tappan reached base on a one-out error, then Maria Servidio and Angeles James worked back-to-back walks.

Jensen Dunkling was 3-for-3 with a double, three runs scored, two stolen bases and one RBI, while Christin Dunkling had two hits, including a triple, two runs scored and three RBI and Serfass doubled and singled, scored a run and knocked in two runs.

Westbrook, who stole two bases, and Hafer each had two hits, a run scored and an RBI for the Lady Wildcats, while Dimon singled and scored two runs, Warner singled and knocked in a run and Testen scored twice.

Sayre finishes the season at 3-16.

The Green Hornets finished out their regular season with a win Friday.

At the plate Paige Carr, Brooke Kohler and Baylea Lehman had two hits each.