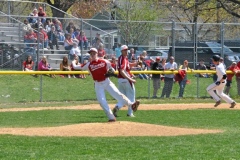 Bronson went six innings for the win with five hits, four walks and two earned runs. He was also 1-for-3 with a run scored an 3-RBI at the plate.

Dylan Perry pitched the final inning with one strikeout.

Cooney and Lee knocked in one run each.

Troy Stivason went 3-for-4 with an RBI to lead Athens while Zane Vergason and Mike Estes also had hits.

Neil Carpenter and Jake Shaffer scored with Stag Shadduck knocking in a run.

Craig Moore started for Athens and earns the loss, going 2 1/3-innings to strike out three while allowing six walks, two hits and two earned runs. Curt Moore came in relief for 2 1/3-innings with one strikeout, one walk, one hit and one earned runs.

Vargason and Stivason finished out combining for three strikeouts, one walk, one hit and three runs.

Dan Saniga went all six innings to get the win for the Hornets.

He struck out six while allowing one walk.

Matt Reese went 4-for-4 with 3-RBI while Connor Coolidge was 2-for-4 with a double and an RBI, Dawson Prough went 1-for-4 with two runs scored as well.

Luke Plummer was 2-for-3 with a run scored for the Indians while Tyler Melko earns the loss.

Wellsboro is at Sayre Monday.

Sam Rotella went all seven for Mansfield to pick up the win.

He allowed three runs on three hits with six strikeouts. At the plate for Mansfield Ben Wilson had a 2-run double, Taylor Hillson also had a double, and Blake Doan had a double with an RBI, Brady Andrews and Max Colegrove also got hits for Mansfield. On the mound for Troy Josh Mattocks picked up the loss allowed 5-runs on five hits with three strikeouts also pitching for Troy was Kyle Jackson who allowed two runs on one hit.

At the plate for the Trojans Chance Lantz had a hit stolen base and run scored, Scotty Reece and Ryan Reeves also had hits for Troy. Josh mattocks and Kyle Jackson also had runs scored.