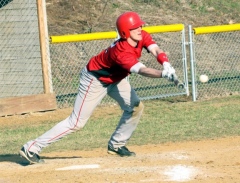 TOWANDA - Towanda had a rough first game as they opened the season with an 11-3 loss to Waverly in non-league baseball action Friday.

"I would much rather start against some other type of pitcher," Towanda coach Bill Sexton remarked. "It gives us a good evaulation of where we are out to be."

Waverly coach Kyle McDuffee felt Bronson was on today, too.

"I was very impressed with Patric on the mound today," he said. "Towanda is a sectional caliber team."

Facing a thrower the caliber of Bronson is good experience for down the road, though.

"If you are going to be successful you have to do stuff against a pitcher like that. We have to hit the ball better, we have to swing at strikes. We took too many pitches. It's hard enough to hit a guy like that, you can't spot them pitches."

Towanda's four pitchers combined to strike out 14 batters on the day but also gave up nine hits and six walks.

"I don't think defense was our biggest problem, I think our biggest problem was we didn't pitch really well tonight," Sexton explained. "We pitched from behind, put too many people on base and gave them opportunities to capitalize on it. We got down by too much against a real good pitcher, too."

Waverly's Zach Saxon was one of those who capitalized, going 2-for-2 with his second home run of the season along with three runs and 3-RBI.

"Zach Saxon hit the ball again hard for a 3-run home run," McDuffee remarked. "This was big because Towanda scored three in the previous inning."

Zach Cooney was 2-for-4 with two runs scored while Cody Marchese, Anthony Girolamo, Dylan Perry and Bronson also had hits.

Marchese also pitched the final inning for the Wolverines, striking out one while allowing one hit.

For the Knights Jared Lines was 1-for-3 with 2-RBI while Brandon Dinelli and Austin Markel had the other two hits. Markel, Sawyer Strope and Ty Johnson scored the three Towanda runs.

The Warriors went up 2-1 in the top of the fourth, then pushed it to 5-1 with three runs in the sixth.

Canton would take a 6-1 lead into the bottom of the seventh but Wyalusing wasn't done yet. The Rams were able to get two runs in the bottom half of the inning but were too far down to complete the comeback.

Kyle Landis (2-for-2), Chase Pepper (2-for-3) and Josiah Bardo (2-for-4) led Canton at the plate. Pepper scored twice, Landis crossed home once while Bardo had an RBI and a double.

Trevor Route and Tanner Machmer also had hits and both scored runs. Machmer had a triple with an RBI while Route had 2-RBI with a stolen base. Jacob Butcher also had a hit while Garrett Wesneski scored a run and Wes Moore knocked one in.

Wesneski got the win as he and Chase Pepper combined for nine strikeouts, eight walks, two hits and three runs.

In a back-and-forth contest it was the Tigers pulling out the win.

Tioga led 11-0 after three innings but Newfield rallied to take a 12-11 lead after the top of the sixth. Tioga rattled off six runs in the bottom half of the inning to retake control and secure the win.

Ryan Vergason and Carter Jackson both went 3-for-3 for the Tigers. Vergason added four runs and an RBI while Jackson had two doubles, 2-RBI and a run scored.

Manuel got the start, going four innings to strike out eight while allowing five hits and two earned runs. Vergason went the next inning, allowing two walks, one hit and five unearned runs.

Xavier Baker was 3-for-5 with a double, 2-runs and an RBI to lead Newfield while Mikey Beach scored the loss.

SAYRE - The Redskins used an 8-run fifth inning to rally past the Wildcats in non-league baseball action Friday.

David Mendola and Nick Hall went 2-for-3 to lead Sayre with Mendola hitting a double. Both also scored once.

Troy Stivason, Curt Moore and Stag Shadduck had two hits each to lead the Wildcats while Jon Kleiner, Mike Estes and Jake Shaffer also had hits. One of Moore's hits was a double.

Stivason, Shadduck and Estes each scored twice while Moore and Shaffer scored once.

Craig Moore started for the Wildcats.