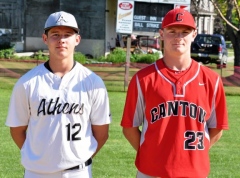 Mansfield's JP Shaw was named the Rookie of the Year while the coaching staffs of Canton and Athens were named the Coaching Staffs of the Year.

Pepper was a dual threat this season, hitting .439 with five doubles, one triple, 17-RBI and two home runs.

From the mound he allowed just seven runs, three of which were earned. He struck out 67 with 13 walks for a 7-1 record.

Shaw finished the season with a .320 average, hitting two doubles. The freshman finished with 11 RBI and seven runs scored.

The First Team is made up of Pepper, Garrett Wesneski and Trevor Route from Canton, Dawson Prough and Brandon Owlett from Wellsboro, Forbes, Zane Vargason and Troy Stivason from Athens, Sawyer Strope and Tristan James from Towanda, Brandon Mattocks from Troy and Bryce Zaparzynski from Mansfield.

Prough hit .593 this season with 23-RBI, 22 runs scored and only struck out three times. He had 13 doubles, one triple and four home runs.

Vargason batted .449 on the year with four doubles and a triple knocking in 18 RBI to go with 22 hits and 20 runs scored. Stivason had a .353 average with 16 stolen bases, five doubles, one triple, 18-RBI and struck out just twice.

Brandon Mattocks had a .408 average with 10 doubles, a triple and a home run. He knocked in 17 runs while scoring 27 times.

Zaparzynski sported a .429 average with three doubles and two triples. He scored 16 times while knocking 12 runs.

Wesneski hit .446 this season with 29-RBI, three doubles and 22 runs. He struck out 25 batters from the mound this season in 16 innings of work.

Route hit .431 with 24 runs scored and 11-RBI. He had five doubles and 11 walks while also defending his position well at second base.

Andrews batted .333 this season with five doubles and a triple while scoring 17 times. His teammate Burd had a .407 average with four doubles and 12-RBI while sporting a 2.1 ERA on the mound in 36 1/3-innings of work.

Place was .295 from the plate this season with five doubles and a home run while knocking in 18 runs.

Conner Route hit .304 with 13-RBI, one double and 12 runs. He only had one error in the field this season as well.

On honorable mention is Shaw and Rylan Whitmyer from Mansfield, Nick Vosburg and Stag Shadduck from Athens, John Bowman and Kyle Landis from Canton, Jared Lines from Towanda, Brian Doty from Wellsboro, Kyle Jackson and Jarod Mattocks from Troy, Tyler Melko from CV, Kyle Colegrove from Williamson and Matt Williams from Sayre.