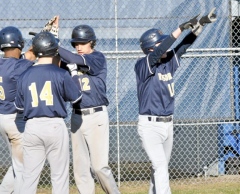 SOUTHPORT, N.Y. - Facing one of the perennial contenders in the IAC the Notre Dame offense took over early in a 14-3 win over Edison on Wednesday.

"Brian Hale had a nice hit tonight with three hits and two doubles and Sam Bruner had a triple with the bases loaded to knock in three runs. I feel very fortunate to be able to take advantage for those opportunities. I'm very pleased with the way we hit the ball, we stung it very well to all fields."

Notre Dame scored seven in the second and six in the fourth and chased Edison ace Brandon Michaud from the game in the second inning.

Bruner had two hits, with the triple, three RBI and he scored two runs and Hale had a 3-for-3 day with the two doubles, four RBI and two runs scored.

Kyle Minchin scored a run and Troy's Matt LaBadie had a hit, an RBI and a run scored.

Hunter Thomas struck out three, walked four and allowed six hits and three earned runs in five innings to get the win. May struck out two, walked none and allowed one hit in two innings.

The Black Knights scored five runs in the first three innings and added four in the sixth in the win.

In the first inning Nick Place had a sacrifice fly and Tristan James singled home Dylan Bates to put the Black knights on top. They led the whole way, but put the game away in the sixth when Noah Huff reached on an error, stole second and after Ty Johnson walked the two scored on a three-base error off the bat of Jared Lines. Bates walked and Lines scored on an infield error off the bat of Place. Bates moved up on a ground out and scored on a passed ball.

"I thought we got pretty effective pitching out of all our kids," Towanda coach Bill Sexton said. "Even though he didn't have a hit tonight I thought Lines swung the bat well. He got good contact in two of his at bats."

James had a hit and an RBI and Devin Patel had a double and an RBI. Huff had two hits, three stolen bases and scored a run and Johnson scored a run.

Matt Learn had a double and an RBI for Williamson and Kyle Colegrove, Carl Gorg and Dalton Confer had hits.

The Warriors scored four runs in the first two innings on their way to the win.

Cahse Pepper struck out five in four innings on the mound and John Bowman struck out eight in three innings of relief.

Connor Route, Travis Butcher, Mason Moore and Jordan Bentley all had hits, with Butcher getting an RBI.

Vargason had two hits, a double and two RBI and Tyler Forbes had two hits and stole two bases.

Codi Jennings scored a run and Jarrett Priester and Nick Vosburg each had hits.

The Green Hornets got four hits, with a double and three runs scored from Brandon Owlett and Dawson Prough hit a home run, had two hits and scored four runs.

Dylan Prough, Brian Doty, Brett Kendrick and Nick Tremper had two hits each in the game and Doty had a double.

Dylan Prough, Joe Allen and Owlett combined on the mound, striking out four and allowing one hit.

Wellsboro is at Troy on Friday.

The Rams exploded for 10 runs in the final two innings to pick up the win on Wednesday.

Holdan Hitchcock had a hit and scored a run and Cody Pickett had two hits and scored two runs.

Kyle Tinna started on the mound and he had two hits and scored a run at the plate.

Marshall Felt started on the mound for the Redskins.

The Tigers trailed 2-1 in the top of the fifth, but scored three in the fifth to get the win.

Levi Adams got the win on the mound, allowing seven hits and striking out one in the complete-game effort.

Brady Andrews had a double and scored a run and Bryce Zaparzynski had two hits, with an RBI and a run scored.

Brian Horton went the distance on the mound for NEB, striking out two and allowing seven hits and one walk.

At the plate Horton had two hits, an RBI and a run scored.

Tyler Emick had two hits and a double, Derek Newman had a hit and an RBI, Aaron Pifer had a hit and scored a run and Garrett Smith had a hit.

NEB is at Wyalusing today.