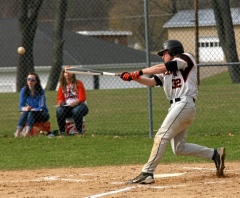 WAVERLY, N.Y. - A late inning rally by Towanda pushed them past Waverly 9-7 for the non-league baseball win Monday.

The Wolverines took a 2-0 lead in the first inning but Towanda followed by going up 3-2 in the top of the second. Waverly would score a run in the bottom of the inning to knot things up at 3-all.

In the bottom of the third Waverly got two more to go up 5-3.

Towanda responded in the fourth as they scored three runs to go up 6-5. Waverly got the advantage again with two runs in the bottom half of the inning to take a 7-6 lead.

But then it was Towanda with the last laugh, scoring twice in the sixth to go up 8-7, then adding an insurance run in the ninth to secure the win.

Sawyer Strope led the Knights, going 4-for-4, including a triple, with two runs, 2-RBI and a steal.

Also for Towanda, Richard Benjamin and Ethan Barto went 1-for-3 with a run scored each. Dylan Bates added an RBI.

James got the start and went two innings with four strikeouts, four hits and three runs, one of which was earned.

Ty Johnson came on in relief and earned his first varsity win. He went three innings with one strikeout, five walks, three hits and four runs, two of which were earned. He moves to 1-0.

Bates went the final two innings with four strikeouts and a walk to get his second save of the year.

"It was a pretty ugly game," remarked Towanda coach Bill Sexton. "But it's better to have an ugly win that an ugly loss. It gets us back to .500 and we'll see what we can do from here."

He was pleased with how his senior captain hit.

"We got a big night out of Sawyer Strope," said Sexton. "He's been hitting the ball well for us, that really kind of sparked us. He got on in each of the innings we scored runs and had key hits in three of the innings. We needed somebody to step up and have a night like that."

At the other end of the spectrum, Sexton was pleased with Johnson's pitching.

"Ty stepped up and ate some innings for us," he said. "Hopefully it's the start of some good things for him this year, too."

For Waverly Perry went 2-for-3 with two runs scored and 2-RBI to lead the Wolverines. Peyton Miller, Brendyn Stillman, Kyle Kinsley, Tim Sutton and Uhl also had hits with Stillman's a triple.

Kinsley knocked in two runs while Miller, Stillman and Mike Girolamo also had an RBI.

On the mound Collin Traub started and went the first 3 1/3-innings. He struck out one while allowing two walks, five hits and six runs, one of which was earned.

Colton Miller went the next 1 2/3-innings with two strikeouts, two hits and one earned run. He was tagged with the loss.

Uhl finished out the final two innings, striking out three while allowing two hits, three walks and one earned run.

With two outs, two strikes on the batter and bases loaded Aaron Pifer scored by stealing home in the bottom of the sixth to give the Panthers the win in a wild non-league contest Monday.

Both teams scored three runs in the first inning but the Panthers had back to back innings of five runs each to take a 13-5 lead after three.

Blue Ridge chipped away at the lead until they tied it in the top of the sixth with three runs.

Tyler Emick was 1-for-4 with a run scored and 2-RBI while David Ford, Hunter Condusta and Cody Clark also had hits.

Condusta knocked in two runs while Clark also had an RBI.

Nate Chilson came on in relief and pitched 1/3-inning to get the win. Alec Morris pitched the seventh inning for the save.

All five combined for two strikeouts and nine walks.

Northeast Bradford also had a triple play in the game. With bases loaded in the fourth inning they turned a 7-5-2-5 triple play to get out of the jam.

The Panthers travel to Wellsboro today.

After scoring two runs in the first and fourth they led 4-0 when Watkins Glen cut it to 4-2 in the top of the fifth.

Tioga responded by scoring five in the bottom half of the game to make it 9-2. The Senecas added three more in the sixth but it was too little too late.

For Tioga Tanner Folk went 3-for-4 with a run scored and an RBI to lead the way. Adam Layman (2-for-4) and Jesse Manuel (2-for-3) also had multiple hits in the game.

Vergason had 2-RBI in the game with Skinner, Peter Simmons and Hendershot also knocking in runs.

Skinner recorded the save, going the rest of the way to strike out two with two hits, three walks and three runs, none of which were earned.

Brennon DeMeritt led Watkins at the plate, going 2-for-4 with 3-RBI.

Vosburg and Carpenter knocked in 2-runs each while Forbes, Stivason, Jon Kleiner and Shaffer also had RBI.

Vargason started and earned the win, going two innings to strike out to while allowing three hits, three earned runs and four walks.

Ben Rubert came on for the next two, striking out four while allowing one hit, one walk and one earned run.

Vosburg pitched the final inning with two walks and a strikeout.

Keir started and earned the loss, going 2 3/4-innings with five walks, eight hits and 13 runs, four of which were earned.

Kochin went the final 1 1/3-innings, allowing one walk, one hit and one unearned run.

Strong middle innings for the Warriors gave them the non-league baseball win over Troy Monday.

It was 1-1 in the bottom of the third when Canton scored two runs to go up 3-1. The Trojans cut it to 3-2 in the top of the fourth but Canton pulled away with back to back innings for four runs each to get the win.

Garrett Wesneski led the way, going 3-for-4 with a 2-run double, another double and 6-RBI.

Jordan Bentley, Moore and Trevor Route each had an RBI.

John Bowman started and earned the win, going three innings to strike out five while allowing one walk and one unearned run.

Butcher, Moore and Brice Cole each got an out in the fourth for Canton before Pepper finished up the final three innings. He struck out four with one run.

Jarrod Mattocks, Kyle Jackson and Jed Wright each had a hit for Troy with Jackson scoring twice and Brandon Mattocks scoring once.

Jackson started and went three innings for the loss. He struck out two with two runs.

Canton is at Williamson Wednesday.

The game was tied 3-3 up until that point. Wellsboro added a run in the seventh but couldn't complete the rally.

Dawson Prough led the way, going 2-for-3 with a double and home run with 2-RBI. Dylan Prough added a double with an RBI while Nick Tremper and Cody DeHaas also had hits. DeHaas knocked in a run as well.

James Mundy started for the Hornets, going four innings to strike out four while allowing five walks. Dylan Prough came on in relief and earned the loss. He went two innings with no strikeouts and one walk.

Sam Moss pitched the final inning, striking out two with one walk.