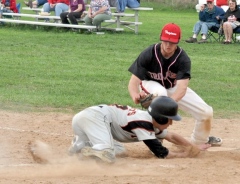 In a game both teams desperately needed it was Wellsboro pulling out the 2-1 win over Mansfield in 10 innings.

Both teams scored one run in the first inning but after that the scoring dried up.

"Both teams had some chances," explained Prough. "Both teams took some risks, each team defensively made plays. It was a game of defense."

Then in the bottom of the 10th Cody DeHaas led off by being hit by a pitch. A Joe Allen sacrifice bunt moved him to second followed by DeHaas taking third on a wild pitch.

Brandon Owlett then brough him home on a sacrifice fly to right field for the win.

"Mansfield is a good team," said Prough. "And while we are good enough to play with them it certainly was a great game for both teams. We're fortunate to get the win."

Owlett went 2-for-4 with the RBI while Dawson Prough was 1-for-3 with a double and run scored to lead Wellsboro. Dylan Prough, Brian Doty, Nick Tremper, DeHaas and Nick Levindoski had hits.

Allen started and went nine innings for the no decision. He struck out four while allowing one run and one hit by pitch.

"I was really happy with Joe Allen's performance," remarked Prough.

Dylan Prough came on to pitch the 10th inning, allowing a walk.

For Mansfield Bryce Zaparzynski went 3-for-5 with a double while Brady Andrews, Max Colegrove and JP Shaw had one hit each.

Jarrod Burd started and went nine innings for the no decision. He struck out six with one walk and one earned run.

Zaparzynski went the final 2/3-innings for the loss, allowing an earned run.

The victory got the Hornets back to .500 as they sit at 8-8. They need to win one of their next two games to reach district play.

They are at Wyalusing Monday and host Danville Friday.

For Mansfield, the loss puts them a game behind Athens in the loss column for the NTL Large School title. The Wildcats beat Wyalusing 16-5 in five innings Friday.

Mansfield hosts Troy next Monday while Athens takes on Wyalusing today and travels to Towanda Monday.

The two teams will meet again next Tuesday at Athens.

EAST TROY - It took extra innings but the Black Knights were able to break through first and earn the NTL Large School win Friday.

"It's a win," remarked Towanda coach Bill Sexton. "We didn't hit the ball well tonight at all, we kind of lucked out in getting those runs."

In the top of the eighth Noah Huff led off by hitting to the shortstop and reaching on a wild throw. He then reached second on a steal.

Jared Lines then bunted with Troy trying to get Huff at third. The ball was overthrown and Huff scored.

After that Terrick Vargason reached on a fielder's choice followed by a fly-out from Nick Place.

Lines then scored on an error off the bat of Dylan Bates to get the second run.

"Strope was pretty dominant to begin with and when he had to come out Bates did a real nice job shutting them down the rest of the way," Sexton remarked. "13 strikeouts between the two of them is pretty darn good work."

Huff went 2-for-4 with a run scored and a steal for the Knights while Vargason had the other hit.

Lines walked three times, scored and had a steal while Landon Brown also stole a base.

For Troy Jed Wright (2-for-4), Kyle Schucker (2-for-3) and Mitchell Morse (2-for-4) all had multiple hits in the game. Brandon Mattocks, Isaac Havens and Kyle Jackson also had hits.

Jackson started and went five innings for the no decision. He struck out five while allowing no hits, three walks and no runs.

Troy travels to Mansfield Monday while Athens is at Towanda.

Starter Alex Uhl struck out five while allowing five hits, two walks and three runs, one of which was earned to get the complete game win.

Down 3-0 after the second, Waverly scored two in the third and four more in the fifth to get the win.

Collin Traub had a double with 2-RBI and a run scored while Peyton Miller and Kyle Kinsley had hits.

Peyton Miller, Kinsley and Mike Girolamo each scored as well.

Brian Colbert went 2-for-3 with two doubles and a run scored to lead Dryden while Alan Davis earned the loss. He came on in relief and pitched two innings with two strikeouts, two walks, three hits and three runs.

The Wildcats pounded out 16 hits in their NTL win over the Rams during baseball action Friday.

Carpenter knocked in three runs while Jake Shaffer had 2-RBI. Vargason, Forbes, Rubert, Sam Perri and Justin Reagan had one RBI each.

On the mound Forbes earned the win, going the first two innings to strike out three while allowing one hit and three walks.

Cody Jennings pitched the third, striking out two with two hits and one unearned run.

Otis had 2-RBI while Williams knocked in a run.

Tinna started and went two innings for the loss. He allowed eight hits, 14 runs, two of which were earned, and two walks.

Holdan Hitchcock finished out, striking out one while allowing two hits, one walk and one earned run.

The Tigers improved to 12-0 on the year in IAC baseball action Friday.

Peter Simmons and Tanner Folk both went 3-for-4 to lead Tioga. Simmons added two runs and an RBI while Folk had a double, 2-RBI and two runs scored.

Jackson started and went the first four innings for the win. He struck out three while allowing no walks and no runs.

Travis Moyer finished out, striking out three while allowing two hits, one walk and one run.

Tioga travels to Edison today for a 10 a.m. start today.

Cuyler Kochin went 3-for-5 with two runs to lead the Redskins to the NTL Small School win Friday.

Jake Wheeler (2-for-4) and Marshall Felt (2-for-4) also had multiple hits in the game. Both players scored twice.

For NEB Garret Smith went 4-for-5 with a double and four runs while Aaron Pifer (2-for-4) and Bryan Ford (2-for-5) had multiple hits in the game. Smith's included a double with four runs.

The Crusaders led 6-0 after the top of the fifth but Trumansburg scored nine runs between the fifth and sixth innings to pull out the cross-IAC win Friday.

Parker May went 2-for-3 with a double, run scored and 2-RBI to lead Notre Dame while Joe Prunier was 2-for-4 with a run scored.

Prunier started and the first 4 1/3-innings for the no decision. He struck out two while allowing three hits, five walks and four earned runs.

Marshall came on in relief and went an inning for the loss. He struck out two with four hits, two walks and five runs, three of which were earned.

Reid pitched the final 2/3-innings with one strikeout.

Trevor Rumsey went 4 2/3-innings for the win, striking out three. Justin Meddaugh and Ty Iannone both went 2-for-3 to lead Trumansburg.