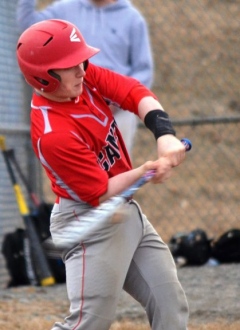 MANSFIELD - The North-Penn Mansfield baseball team had a five-run fourth inning and overcame a six-run sixth by Canton in a 9-6 victory on Thursday.

Mansfield led 2-0 after one inning and 7-0 after four, but Canton cut the deficit to 7-6 with a big sixth inning, before the Tigers scored two in the bottom of the sixth to seal the win.

Jarrod Burd, J.P. Shaw and Zack Kriner had two hits each for Mansfield with Burd and Kriner each scoring two runs and driving in one run, while Shaw had an RBI.

Shaw pitched four shutout innings for Mansfield and Burd and Zaparzynski each pitched in relief.

John Bowman was 4-for-4 for Canton with two RBI, a double and a run scored.

Tyler Cole started on the mound for Canton.

ATHENS - The Wildcats pounded out 10 hits in the win on Thursday.

Zane Vargason had three hits, four runs and two RBI, with a double, and Luke Newman had two hits and four RBI in the win.

Nick Vosburg had a hit, two RBI and two runs and Matt Collins had a hit, an RBI and scored three runs.

Tyler Forbes had a hit, a run scored and two RBI and Ben Rubert had two RBI.

Marc Felt and Justin Reagan each had a hit and a run scored and Cody Jennings and Daniel Joyce each scored runs.

Sam Perri and Jennings each pitched two innings and Joe Horn and Forbes pitched one inning each as Athens allowed five hits and struck out eight.

Learn started on the mound for Williamson and Snyder and Bastian pitched in relief, as Williamson allowed 10 hits and struck out three.

Adam Szklanka had two hits, with a double and two RBI in the loss and John Saxe had a double and a run and Steve Macelhaney scored a run for the Griffins.

Saxe started on the mound for the Griffins.