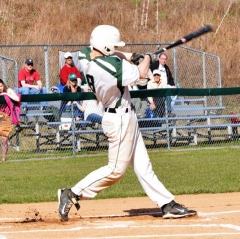 WELLSBORO - The Green Hornets handed the Troy Trojans their second NTL baseball loss of the season on Wednesday, winning 8-3.

Wellsboro scored four runs in the first two innings to take a 4-1 lead. Wellsboro went up 5-1 after four, before Troy scored two in the fifth to cut the deficit to 5-3. The Green Hornets put the game away with three runs in the sixth.

Nick Levindoski had two hits for Wellsboro and Dawson Prough had a triple and scored two runs. Nick Tremper had a hit and scored a run.

Brandon Mattocks had two hits, with a double for Troy and Kyle Schucker, Brock Schucker and Mitchell Morse all had hits for the Trojans.

"I would say it's a good win," Wellsboro coach Philip Prough said. "We put pressure on Troy when we're on the bases and they made a lot of errors and part of that was forcing the action. We were very disciplined at the plate, although they had hard throwers we came up with a good approach."

Prough liked what he saw out of Allen.

"I'm very pleased with his approach to the game plan tonight," Prough said. "This is a four game win streak for us. I'm very pleased, especially with the progress the freshmen are making. I'm pleased with how our team is collectively understanding the game. This is definitely a big boost for us, but there is still more work to be done."

Wellsboro is at NEB today.

The Wildcats scored two runs in the seventh to rally for the victory on Wednesday.

Towanda led 5-2 after four innings before the Wildcats rallied.

In the seventh Tyler Forbes led off with a single and stole second and Cody Jennings walked, before Marc Felt drove home the winning run with a single.

Nick Vosburg had a hit for Athens and Luke Newman had two doubles and scored two runs.

Felt had two hits, with a double, two RBI and a run scored and Aaron Barry had a hit.

Jennings started for Athens and Matt Collins struck out three in 3 2/3 innings, while Felt got the win striking out four, allowing one hit and one walk in three innings of shutout relief.

Nick Place had a double for Towanda and Tyler Bidlack had two hits, with two RBI and a run scored.

Keegan Kisner had a hit, an RBI and a run scored and Ethan Barto had a hit.

"I'm pleased with the way the kids played, I'm not pleased with losing the ball game," Towanda coach Bill Sexton said. "We had the lead the whole ball game and gave it up in the seventh, we have to figure out a way to win these kind of ball games. After getting pounded by Canton Monday night we bounced back well. We hit well in situations, we played well offensively tonight."

Sexton was happy with his pitching.

"Place and Thomason pitched really well for us tonight, I'm pleased with Thomason, when he came in the fifth with no outs, two runners already on, he got a strikeout, a fly ball and a strikeout against some good hitters for them. I'm pleased with him. He pitched a strong inning in the sixth, got the nine hitter out, the lead off reached on an error, the number two got a single and got three and four, that's pretty gutsy pitching out of a young kid. Unfortunately we made an error, gave up a hit and gave up the game in the seventh."

Towanda is at Williamson today.

SAYRE - The Warriors extended their lead in the NTL, Division II with the win on Wednesday.

John Bowman struck out 12 for Canton, allowing just four hits in the win.

Mason Moore had four hits and scored a run for Canton and Travis Butcher had two hits, two RBI and two runs scored.

Tyler Cole had a hit and Bowman had a hit.

Nate Sweet started on the mound for the Redskins.

The Tigers had 28 hits on their way to the win on Wednesday.

Manuel struck out 11, allowed four hits and walked two for the Tigers.

Tioga is at Newfield on Friday.

LERAYSVILLE - The Panthers scored six runs in the first four innings on their way to the win.

Nate Chilson and Tyler Emick had a hit and Emick and Bryan Ford scored runs.

Ford struck out one and allowed three hits and two runs, one earned, in three innings to get the win and Horton struck out three and walked none, allowing three hits in four scoreless innings of relief to get the save.

The Wolverines scored in six of the seven innings on their way to the victory on Wednesday.

Peyton Miller had two hits and scored three runs, with a double, and Brendyn Stillman had a hit, two RBI and three runs scored.

Kyle Kinsley had two hits, an RBI and three runs scored and Nate Bennett had a hit and three RBI.

Zac Saxon had a hit, an RBI and he scored four runs and Mason Salsman had a triple, three RBI and a run scored.

D.J. Myers had an RBI and Collin Traub had a hit and scored a run. Zak Gingrich had a hit, an RBI and he scored two runs.