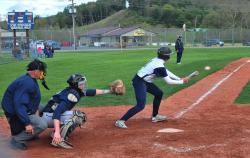 In the seventh, Corey Wells led off with a single and scored on a Kurtis Easton single. An error off the bat of Jace Bieser allowed Easton and Caleb Fitzwater, who had walked, to score.

Christian Kemp had two hits for the Indians and Bieser had a hit.

Caleb Fitzwater scored a run and Wynn Doan had a hit.

Caleb Fitzwater and Bieser combined to strike out five, while allowing four hits for CV.

Dalton Prough scored on a fielder's choice and the Hornets pulled out an NTL baseball win Tuesday.

Prough led off the seventh with a double then found home four batters later on an RBI off the bat of Caleb Tennis for the victory.

Taynton Repard, Caleb Tennis and Silas Wagaman each had a hit with an RBI while Billy Lechler also had a hit.

For Towanda, Lars Thomason was 2-for-4 with three runs scored while Ryan Bartholomew was 2-for-3 with an RBI.

Brett Crispell had two hits, Ricky Smiley knocked a double and an RBI while Keegan Kisner scored a run.

Thomason worked six innings for Towanda, allowing 10 hits with no strikeouts or walks and Troy Pierce pitched 1/3 of an inning.

Towanda is at North Penn-Mansfield tonight.

NoPo had two big innings in their non-league win over the Tigers Tuesday.

They scored six in the top of the first then added four more in the third for the win.

Carl Dinger went 3-for-3 to lead the Tigers while JP Shaw had a home run with 2-RBI.

Justice Giarth and Brendan Hill had two hits each with Hill's a double. Hill also scored a run.

Joel Whitteker started, but didn't record an out in 21 pitches. He allowed three walks, one hit and five earned runs to record the loss.

Hillson came on in relief and threw two innings. He struck out one while allowing two hits and one earned run on 23 pitches.

Derrick Herbst went the rest of the way. He struck out four while allowing two walks, four hits and five runs, four of them earned, on 73 pitches.

Blake Jeffers had two hits, with an RBI, to lead Northern Potter.

The Crusaders dropped an IAC game on Tuesday.