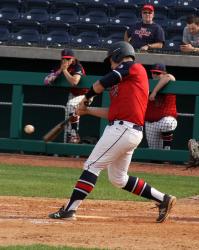 STATE COLLEGE — Last year Sayre lost an ugly district final to Millville. On Wednesday they were finally able to wash that bad taste out of their mouths.

The Redskins pounded out a 10-0 win in six innings over Cowanesque Valley to claim the District IV, Class A baseball title.

"This was our goal from day one," Sayre coach Jon Pack said. "We talked about that game to start our season off with in March and we knew what it felt like to come up short. We gave everybody index cards to write down some personal and team goals at the beginning of the year and this was everybody's goal. It was District IV title or bust for us and we knew that coming into the season."

Playing the Quakers helped get Sayre ready for the playoffs.

"We wanted that Millville game," said Pack. "We played great and coming into this game we felt confident. We already played them twice, we had a good scouting report on them. We just tried to keep the kids grounded throughout the week. On this stage anybody can win one game. We wanted to come confident but not overconfident."

Experience is the big difference between 2016 and 2017 for Sayre.

"I think getting more experience playing on the bigger stages," explained Hanafin. "That obviously showed last year we weren't as ready as we were this year. We were ready this year."

"Our team is comprised of a lot of upperclassmen," said Pack. "A lot of kids, starters especially, have been a part of the last two years. They've been here."

Sayre used a spirit breaking 5-run third inning to jump out to the lead. They added another run in the fourth then scored four more in the sixth to get the win.

Jordan Rockwell, last year's loser against Millville more on defensive miscues on his pitching, threw a gem again this year. He struck out four while allowing just two hits and three walks on 86 pitches.

"It feels great," Rockwell said. "We knew we had to come here and play our hearts out to win. Cowanesque is a great team. They've played well all year round and we knew it wasn't going to be easy."

Rockwell credits his defense, which played error free ball this time around.

"They played their hearts out," he said. "They made unbelievable plays to back me up."

Connor Hanafin had the big bat this time, going 2-for-4 with two doubles and 3-RBI. Quinn Hanafin (2-for-3) and Chris Ray (2-for-2) also had multiple hits in the game.

Sweet and Quinn Hanafin each had two runs batted in with Rockwell, Esposito and Ray also getting an RBI.

Christian Kemp and Seth Huyler had the two CV hits.

The Indians used three pitchers with starter Caleb Fitzwater getting the loss.

CV threatened in the top of the first as Jace Bieser would reach second base but was stranded.

Then in the bottom of the third Sayre's bats came alive.

Number nine man Ray led off with a single followed by Matt Williams reaching on a walk. Rockwell loaded the bases with a bunt single.

Sweet then brought two runs in with a hit to put Sayre up 2-0.

After an out Quinn Hanafin had a hit that brought in Rockwell and Isaiah Firestine, who was running for catcher Sweet.

Two batters later Esposito had a 2-out single to bring in Quinn Hanafin.

"That let us ease into our game," Rockwell said about their big inning.

Then in the bottom of the fourth James Esposito reached on an error to lead off.

After a Ray sacrifice James Esposito reached third on a balk.

Rockwell hit him home on a sacrifice fly to left field to make it 6-0.

Then in the sixth James Esposito drew a 1-out walk followed by Ray reaching on an error.

Williams would walk followed by Rockwell getting hit by a pitch to score James Esposito.

After a bases loaded fly-out Connor Hanafin hit a double to the fence in left field to bring Ray, Williams and Rockwell to get the 10-0 mercy rule win.

Connor credits a team effort for the win.

"If we don't up nine other runs that hit doesn't matter," he said. "It was a team effort just rallying."

For CV this is the culmination of a rebuilding effort that began when their seven seniors were freshmen.

"It's been a long building process for most of this group," said Indian coach Dennis Fitzwater. "When we started nobody knew about CV. They've had a great career the last four years. We made it a point to get on the map last year."

He's hoping that his younger players soak this stage in for the future.

"Next year is going to be a young team but a strong young team because of the core we built," said Fitzwater. "We have a group of eighth graders who were here that are playing junior high. They're excited to see where the program is going."

Fitzwater believes his team can make it back soon.

"Most of these kids play year round anymore if they're serious about the game," he said.

"We just have to keep coming to practice the next day and getting prepared for the next game," Rockwell said.