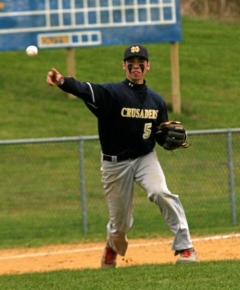 Down 6-1 in the bottom of the second innings the Sullivan County Griffins rallied for a 10-6 win over Bloomsburg on Monday.

The Griffins got two runs in the third and three in the fourth to tie things up and added four in the sixth for the victory.

Heinrich was 3-for-3 and scored three runs, with four RBI, while Mullen was 3-for-4 with two RBI and two runs scored.

Zach Meyer, Tom Blasi and Connor Wylie all had hits for the Griffins. Wylie had a double and he and Blasi scored runs, while Meyer had an RBI.

"These boys, they just love to play baseball, it doesn't matter what the score is against them, they know once they come together in one of those innings they can pick it up," Sullivan County coach Walt Tubach said. "Hopefully tomorrow they can clinch the playoff spot against Montgomery, but we have seven games left to do it."

The Griffins will looke to clinch a district spot for the second straight year as they host Montgomery today.

TIOGA CENTER, N.Y. - The Tigers scored six in the fifth to come away with the victory Monday.

Notre Dame got three runs back in the sixth, but couldn't complete the comeback.

Adam Leyman had the big hit for the Tigers, deliver a two-run bases loaded double in the fifth.

Jake Howland and Jesse Manuel each scored runs and Ryan Vergason had a hit and scored two runs, while Peter Simmons had a hit, an RBI and two runs scored.

Carter Jackson had a hit, a run scored and two RBI and Leyman had two RBI, two runs scored and a hit.

Adam Perry had a hit and an RBI.

Wyatt Martin had two hits and scored a run and Parker May, of Ridgebury, had a hit, while Riley Leonard scored a run.

"It was a big win, coming off that loss (to Newark Valley) on Friday night," Tioga coach Bob Seymour said. "The kids played hard and it was a big game because it counts in the division."

The loss by Notre Dame drops them into a tie with Waverly atop the division standings.

Brandon Owlett struck out 14 and allowed just two hits and three walks and one run in the win for Wellsboro on Monday.

Dawson Prough was 3-for-4 with a run scored and an RBI, while Matt Reese had a hit and scored a run as Wellsboro got two runs in the first and held on for the win.

Joe Allen and Cody DeHaas each had hits for Wellsboro.

Nick Skerpon had a hit and stole home for Sayre's lone run in the fourth inning and Dave Mendola had a hit in the game.

Derrick Keir took the loss for Sayre on the mound, striking out three.

Wellsboro is at Troy today and Sayre is at Canton.

Hunter Huyett was 3-for-3 with two home runs, four runs scored and four RBI and he threw a no hitter on the mound for Williamson.

On the mound Huyett struck out five, walked two and hit one batter.

In a completed game from earlier this year Zach Cooney struck out six, walked six and allowed one run on three hits to get the victory for Waverly.

At the plate Cody Marchese had two hits, two runs scored adn an RBI, while Zach Saxon scored a run and Anthony Girolamo had a hit and an RBI.

Kyle Kuzma had a hit, an RBI and scored two runs and Alex Uhl had a hit and an RBI.

In the regularly scheduled game on Monday Uhl struck out nine, walked six and allowed three hits and one run for Waverly in the victory.

Kuzma had a hit, two RBI and scored a run and Brighton Wood had a hit, a run scored and an RBI.

Cooney and Saxon each had doubles in the game and Marchese stole three bases, Girolamo stole two bases and Bronson stole a base in the victory.

Troy had runs in the second, third, fourth, fifth and sixth innings to get the victory. The Indians had two runs in the fifth and one in the sixth in the game.

Kyle Jackson got his first varsity win on the mound, striking out six, walking five and allowing two runs on three hits in five innings. Trey Murray came on to get the save, working the finaltwo innings with one strikeout.

Josh Mattocks was 3-for-4 with a run scored and Chance Lantz had a triple and an RBI, while Darton Harwick had two hits, a run scored, an RBI and he stole five bases.

Jackson had a hit and scored a run, and Jared Mattocks and Collin Binford each scored a run in the game.

Nate Bonham had two hits for CV and Chris Seymour had a hit and scored a run, while Ethan Mead and Jake Burrell also scored runs for CV.