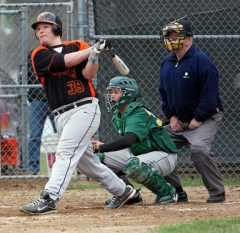 WYSOX - Down 0-2 Towanda rallied to pull out a 4-2 win over Wyalusing in NTL East baseball action Saturday.

"It's always good to beat Wyalusing," Towanda coach Bill Sexton said. "Year in and year out it's a key league matchup for us. It's good to pick up that win."

After two scoreless innings Wyalusing scored in the top of the third. After an Isaac Bennett single back to back walks to Andrew Pickett and Chad Johnson loaded the bases.

An infield single by Kyle Tinna scored Bennett followed by a throwing error allowed Pickett score. Tinna was thrown out heading to second to end the inning.

In the second half of the inning Towanda's Brandon Dinelli reached on an error, then went to second off a Jared Lines groundout. Dylan Bates then hit him in on a single to make it 2-1. Nick Place followed that up with his first home run of the year to put the Knights up 3-2.

They extended the lead in the fourth as Richard Benjamin hit his first varsity single putting Tristan James on second. After two outs were recorded Lines walked to load the bases. Bates then doubled, scoring the courtesy runner Cole Sexton but the inning ended as Wyalusing got a runner tagged out at home.

The key for the Knights was James' four perfect innings of relief pitching. He struck out six in the final 12 outs for the save.

"I was pleased with the relief effort out of Tristan James," Sexton remarked. "He came in and threw four perfect innings."

The veteran coach was also pleased with his team's resilience.

"I was pleased with the way we bounced back after they scored their two runs," Sexton said.

"Big game at the plate for Bates with three hits and the 2-RBI," Sexton said. "And a big hit for Nick Place, his first career home run."

For Wyalusing Bennett, Pickett and Tinna had their three hits.

Pickett started and scored the loss, going three innings to allow four hits, one strike out and one walk. None of the three runs were earned.

Suede Reed pitched the next two, allowing two hits, three walks and one earned runs. Bennett pitched the final inning with one walk.

Towanda will travel to Athens Tuesday.

The Griffins improved to 5-3 on the year as they swept CMVT in a double-header Saturday.

In the first game CMVT led 5-4 after three innings but from that point on Sullivan out scored them 10-1 for the win.

Barry Heinrich went 3-for-3 with a triple, three runs and an RBI to lead Sullivan while Kelby Mullen (3-for-5), Zach Meyer (3-for-5) and Derek Farrell (3-for-4) also had multiple hit games.

Hatton added three runs and an RBI while Flannery had 2-RBI and a run scored.

Meyer went the distance, striking out six while allowing 13 hits, one walk and four earned runs.

In the second game Mullen went the distance on the mound for Sullivan, allowing six hits, two walks and one earned run while striking out six.

Mullen was also strong at the plate, going 3-for-3 with 4-RBI and a run scored while Heinrich, Meyer, Blasi, Wylie and Farrell also had hits. Heinrich's and Wylie's were doubles.

Farrell and Hatton scored twice while Frye and Wylie also crossed home. Heinrich and Blasi each had an RBI.

Emmett Watson went 4-for-5 to lead the Warriors to the NTL West win.

Travis Butcher added a hit, an RBI and three runs scored while Wes Moore and Tanner Machmer scored three times with Kyle Landis and John Bowman each scoring once.

Bowman started and got the win while Jacob Barrett and Chase Pepper also saw action.

Tyler Melko had a double and triple for CV while Brandon Whitesell added a 2-run double. Luke Plummer scored the loss.

Canton will host Mansfield Monday then travel to Williamson Tuesday for a make-up.