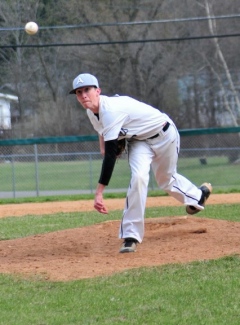 Zane Vargason (2-for-3), Troy Stivason (2-for-3) and Stag Shadduck (2-for-2) each had multiple hits on the day for the Hornets. Vargason added two runs and an RBI, Stivason had a triple, three runs and a run batted in and Shadduck added an RBI.

Jarrett Priester was 1-for-2 with a run scored and three RBI while Jon Kleiner added a hit with an RBI.

Dawson Prough led Wellsboro, going 2-for-4 with two doubles while Dylan Prough also went 2-for-4 with a run batted in. Nick Temper was 2-for-4 as well with a run scored.

Brandon Owlett and Joe Allen both went 1-for-2 with Allen's hit a double. Owlett scored once while Allen knocked in a run.

James Mundy started and earned the loss, going one inning to strikeout two while allowing two hits, four walks and six runs, two of which were earned.

Allen went the next three innings, striking out one while allowing three hits, three walks and three runs, two of which were earned.

Owlett finished up, striking out seven while allowing three hits and one earned run.

Wellsboro will travel to Williamson Monday.

The Panthers picked up another shoot out win, this time with a walk off single in the bottom of the seventh, to pick up the NTL Small School baseball victory Friday.

Down by one going into the bottom of the seventh Brian Horton led off with a walk then stole second. He reached third on a ground out, then was brought home on an Alec Morris single. Morris reached second as the batter behind him walk, followed by Bryan Ford knocking him in on a single to win the game.

Both teams were tied at one after the opening inning before the Panthers jumped out to a 5-1 lead after the fourth. Williamson roared back with three runs in the fifth and the two went back and forth through the seventh.

Ford and Aaron Pifer both went 2-for-4 while cody Clark and Horton had doubles. Garret Smith and Morris also had hits.

Horton started and went five innings for the no decision. He struck out two while allowing one walk, four runs and seven hits. Harvey came on in the sixt h to strikeout one while allowing three hits, two runs and one walk.

Nate Chilson pitched the seventh and earned the win. He allowed three hits and one run.

For Williamson Jon Daley went 3-for-3 with two runs, two steals and an RBI while Jake Rice was 3-for-4 with a run and RBI.

Matt Learn and Wyatt Gorg also had hits. Learn had an RBI with a run scored while Gorg had 2-RBI and crossed home.

The Crusaders scored four runs in the sixth to rally for the IAC Large School baseball win Friday.

Waverly scored three runs in the top of the third to take the lead but the Crusaders responded with two runs of their own in the bottom half of the inning.

Waverly would push their lead to 5-2 with runs in the fifth and sixth before Notre Dame's big inning.

"For the last week we've been struggling to score runs and get clutch base hits," Crusader coach Bill Hopkins said. "Today, down 5-2 in the sixth inning it was kind of status quo but we were able to rally and come from behind. Hunter Thomas had a big 2-RBI single for the tying and winning runs and Parker May came in during the top of the seventh with Waverly threatening to shut the door. Our veteran players came through for us. We're really pleased with the win."

May went 3-for-4 to lead the Crusaders while registering the save. He pitched the seventh inning with one strikeout and one walk.

Thomas was 2-for-4 with 2-RBI and earned the win. He went the middle three innings, fourth through sixth, to allow three walks, four hits and two runs, one of which was earned, while striking out one.

Brian hale went 2-for-3 with a run scored for the Crusaders while Kyle Minchin, Matt LaBadie, Cameron Reid and Sam Bruner also had hits.

Derek Marshall started and went the first three innings for the no decision. He struck out three while allowing three hits, one walk and three earned runs.

Alex Volpe, Kyle Kinsley and Zach Saxon each went 2-for-3 in the game to lead Waverly. Kinsley's included a double with 2-RBI while Volpe also knocked in a run.

On the mound, Traub started and went 5 1/3-innings to strikeout four while allowing eight hits, one walk and five runs, three of which were earned.

Dylan Perry came on in relief and went 2/3-innings. He allow three hits and one earned runs to record the loss.

A 3-run third innin was the difference in the Trojan's NTL Large School win Friday.

Dane Smith also had a double for the Trojans.

Kyle Schucker started and went four innings to strike out four while allowing four hits. He improves to 3-1 on the year. Mitchell Morse came on for two innings with two strikeouts and one run with Ethan Calkins coming in for the save in the seventh. He allowed two hits and no runs for his fourth save of the season.

Wyalusing's run came in the sixth when Devin Carr scored on a Colin Edsell hit.

Holdan Hitchcock had two hits and a stolen base for the Rams while Dylan Otis and Jordan Salsman also had hits.

Cody Pickett went the final three innings to strike out two with one hit.

A big first inning by the Tigers pushed them to an NTL Large School baseball win Friday.

Mansfield got a Brady Andrews double and Bryce Zaparzynski single to start the game. Jarrod Burd then singled to bring Andrews home.

After Burd was picked off first Rylan Whitmeyer singled in Zaparzynski. Levi Adams and JP Shaw had back to back singles to bring in Whitmeyer. Adams then scored on a pass ball.

Whitmeyer (2-for-3) and Shaw (2-for-3) led the Tigers while Andrews, Zaparzynski, Burd, Adams and Joe Whittaker also had hits. Andrews had an RBI while Max Colegrove and Whittaker also scored runs.

Shaw started and went the first four innings to get the win. He struck out four while allowing four walks, six hits and two earned runs.

Zaparzynski went the final three innings to strike out three while allowing one hit and one walk for the save.

Nick Place went 3-for-4 with an RBI to lead the Knights while Sawyer Strope was 2-for-3 with two runs and a double. Jared Lines and Dylan Bates also had hits with Lines scoring a run.

"Tristan really didn't have his location to begin with and Mansfield rapped out six hits in the first inning," Towanda coach Bill Sexton said. "After that he settled down and pitched really well, did what a good pitcher should do. He didn't have his good stuff early, got out of the first with a strikeout and pop out and then retired nine out of the 10 after that. He got the first guy in the sixth then we made three errors in that inning."

The Knights also failed to get timely hitting.

"We hit pretty well in the middle of the order," explained Sexton. Strope and Place and Bates hit pretty well but we couldn't get anything going in other places. We loaded the bases in the first inning and only got one run out of it."

Halfway through the season Towanda is still fighting to be .500.

"At this point were not able to complete what we need to do," Sexton said. "Hopefully it's going to come around but it better come around soon. There's not much left in the season."

Trevor Route went 3-for-5 with two runs scored to lead the Warriors to an NTL Small School baseball win Friday.

Wesneski and Landis scored twice while Pepper and Travis Butcher each scored once. Cole knocked in two runs while Pepper also had a run batted in.

John Bowman went the distance for the win, striking out 14 while allowing three hits, three walks and one earned run.

Tyler Melko, Ethan Mead and Brendon Bell had the three CV hits. Bell's double knocked in Melko for their run.

The Tigers pounded out 15 hits to get the IAC Small School South Division win.

Ryan Vergason (3-for-6) and Peter Simmons (3-for-5) led Tioga. Vergason had two doubles, two runs and 5-RBI while Simmons had an RBI, three runs and 3-RBI.

Manuel started and went the first four innings to get the win. He struck out six while allowing four runs, one of which was earned, four hits and one walk.

Jackson came on in relief for three innings with one strikeout, two hits, one walk and no earned runs.

Tioga travels to SVE today with a 10 a.m. start.

Jake Wheeler went 3-for-4 with a run scored to lead Sayre while Cuyler Kochin was 2-for-3 with a run.