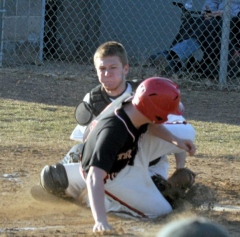 CANTON - The Warriors held off a scrappy Wellsboro squad to pick up the NTL baseball win 4-3 Tuesday.

The Hornets took their first lead in the top of the fifth with two runs, going up 3-2 but it was short lived as Canton added two more in the bottom half of the inning to lead 4-3.

Garrett Wesneski added a double with an RBI and run scored for Canton while Kyle Landis, Tanner Machmer and Mason Martell also had hits.

Landis had an RBI while Travis Butcher and Connor Route scored.

Wesneski started and went three innings to strike out six while allowing three walks and one run. John Bowman came on in relief, going 1 2/3-innnings with three strikeouts, two walks and two runs.

Pepper finished out and earned the win with six strikeouts and two walks.

For Wellsboro Dawson Prough had two hits, including a double, an RBI and run scored while Brandon Owlett scored the other two runs.

On the mound Dylan Prough and went three innings followed by Joe Allen for two innings and Owlett for one. The three pitchers combined for 14 strikeouts.

ATHENS - Three runs in the bottom of the fifth was the difference as the Wildcats picked up the NTL baseball win Tuesday.

Troy led 2-0 after the top of the third but Athens cut it to 2-1 in the bottom half of the inning. They would push the lead to 4-2 after the fifth.

Troy cut it to a 1-run deficit in the top of the seventh but couldn't knot it up.

Jarrett Priester (2-for-3) and Jake Shaffer (2-for-3) had multiple hit games for the Wildcats while Tyler Forbes, Dan Fisher, Zane Vargason and Luke Newman also had hits.

Stag Shadduck, Forbes, Fisher and Troy Stivason scored the runs as Vargason, Priester and Stivason had 1-RBI each.

On the mound Sam Perri started adn went three innings to allow three hits, two runs, one of which was earned, two walks and five strikeouts.

Ben Rubert came on in relief, going two innings and eventually picking up the win. He allowed one hit and struck out two.

Kyle Jackson went 2-for-3 with an RBI to lead Troy while Brandon Mattocks, Jarrod Mattocks and Isaac Havens also had hits.

The Tigers picked up a non-league baseball win Tuesday.

Brady Andrews (4-for-4) and Jarrod Burd (4-for-4) led the way at the plate. Andrews added three runs and 2-RBI while Burd had a run scored and 3-RBI.

Matt Sullivan was 2-for-3 with three runs while Bryce Zaparzynski went 1-for-2 with two runs and 2-RBI.

Andrews got the win in the mound, going three innings to allow one hit while striking out four.

Mansfield is at Williamson today.