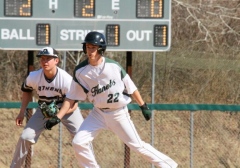 Tyler Forbes added a triple with two runs while Dan Joyce had a double with a run scored and an RBI.

Perri knocked in three runs, Newman had 2-RBI while Collins, Joyce and Secules had one RBI each.

On the mound Perri started and went the first three innings for the win, striking out three while allowing two hits, one walk, two hit batsmen and one earned run.

For Wellsboro James Mundy was 2-for-2 while Sam Moss, Nick Webster and Nick Levindoski also had hits.

Mundy went the final 2 1/3-innings with one walk, three hits and three runs, one of which was earned.

Back to back eight runs innings in the third and fourth gave the Warriors a non-league baseball win Saturday.

Learn knocked in four runs while Daley and Austin had 2-RBI each. Hunter Sackett, Bastian and Cevette each had one run knocked in.

Learn pitched the final inning with one strikeout, one walk, two hits and one earned run.

In the first of a double-header Tyler Melko propelled the Indians to a non-league baseball win Saturday.

Fitzwater and Freeman both scored while Corey Wells and Bieser knocked in runs.

On the mound Wells started and earned the win, going the first four innings with two strikeouts and one run.

Nevin Stiles came on for the final three with two strikeouts, one walk and two hits.

The second game took extra innings in the back and forth contest.

Down 3-1 Northern Potter scored five runs in the bottom of the fifth to go up 6-3.

CV retook the lead with four runs in the fifth but a NoPo run in the sixth sent the game into extra innings. They would score in the bottom of the ninth for the win.

Jace Bieser, Bell, Corey Wells, Logan Hurler and Caleb Fitzwater all scored while Bell, Lingle and Stiles each knocked in a run.

Freeman went the next 2 1/3-innings with five hits, one strikeout, two walks and four earned runs.

Fitzwater went the final 2 2/3-innings and scores the loss, striking out one with four hits and one unearned run.

It was a rough first game for the Rams as they went 1-1 on the day.

Jon Morrison started and earned the loss in one inning of work, allowing five walks and seven runs. Brown came on in relief and struck out two while allowing six walks, nine hits and eight earned runs.

It was a shoot out in the second with Ridge Williams' bat the difference.

Down 8-5 in the bottom of the sixth Williams had the go ahead hit to put Wyalusing up 10-8.

Bloomsburg would rally in the top of the seventh with four runs but the Rams fought back in the bottom half of the inning. Once again it was Williams coming up big, getting a walk off 2-run single for the win.

On the mound Bennett went four innings with four strikeouts, one walk, 10 hits and six earned runs while Dylan Otis came on in relief. He went the final three innings for the win, striking out three while allowing six hits, no walks and four earned runs.

The Rams travel to Towanda Monday.

The Trojans opened the tournament with a loss as they mustered just five hits.

The Trojans jumped out early then used a seven run third inning to pick up the non-league win.

Kyle Schucker, Brock Schucker, Nick Stephani and Mitchel Morse had hits as well with Jarod Mattocks, Lantz and Stephani each getting a double.

Jarod Mattocks and Lantz had 3-RBI each with Kyle Schucker, Dane Smith, Binford and Morse knocking in runs.

Nathan Swain got the win, striking out one while allowing nine hits, six walks and two earned runs in five innings of work.