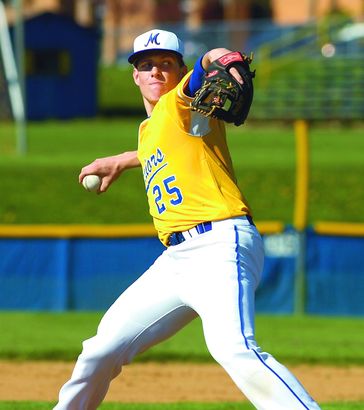 Better area baseball years might come along but 2013 forever will be tough to beat.

The rest of this story is a look back at this memorable season.

Second Runner-up-Bob Rockwell, Canton: The long-time coach has been a Canton institution and has quietly built one of the district's most consistent winners. This year he led Canton (23-3) to its most wins, a league championship and history. The Warriors captured both their first district and Eastern Region championships while playing well in all facets. Cool under pressure, Rockwell built one of the state's most fundamentally-sound teams and has lots more ammunition to again put Canton on the statewide map next year.

First Runner-up-Casey Waller, Hughesville: Most years, Waller would have ran away with the award, one he has won three times before. One of the state's premier coaches year in and year out might have done his best job while leading Hughesville (18-8) to its first District 4 Class AA championship and to the state quarterfinals. Hughesville entered districts a big underdog but peaked when it mattered most and won 13 of its last 15 games, while stunning state champion Loyalsock in the district final. Waller got everything he could out of Hughesville and has forever changed the program's complexion.

And the Winner is...Jeremy Eck, Loyalsock: So many obstacles piled up throughout the season, but Eck remained calm during the storm. One of the state's top young coaches became a source of strength for his injury-plagued team and convinced them that anything was possible as long as it continued plugging away. Loyalsock lost three times and every time came back with fury, especially in states when it beat four district champions who were a combined 81-9. Eck pushed all the right buttons and motivated his team to achieve the ultimate goal. Loyalsock is not the easiest place to coach, but fans there should realize they have something terrific with Eck leading the program.

Second Runner-up (tie)-Sadiq Burkholder, Hughesville and Kenny Koch, Muncy: Burkholder was dominant down the stretch and shined in the postseason, throwing a two-hit shutout in a district quarterfinal win over South Williamsport and a memorable nine-inning complete-game with 14 strikeouts against Loyalsock in the final. Talented and tough, Burkholder went 9-4 with four saves a 1.62 ERA and 90 strikeouts in 69 innings pitched. Koch was proof of how deceiving a pitcher's record can be. The hard-throwing sophomore went 3-4 but never had a bad outing, compiling a 1.44 ERA and striking out 76 and 43 2/3 innings. Koch, also a fantastic catcher, shut down Canton in the district semifinals and allowed only 19 hits all season, holding opponents to a .131 average.

First Runner-up-Kyle Datres, Loyalsock: He did not throw much during the regular season after getting a late start due to an extended basketball season, but was one of the state's best at the perfect time. Datres mowed through the state tournament, going 3-0 in four games while finishing the postseason with a 4-0 record and one save. Datres did not allow a run in the first or second round of states, threw a brilliant complete-game in a 2-1 district semifinal win over Montoursville and went the distance in the state final against Beaver. The sophomore finished 5-1 with three saves a 2.14 ERA and 56 strikeouts in 43 2/3 innings. Datres is 14-1 in two years and is the epitome of a big-game pitcher.

And the Winner is-Justin Lambert, Hughesville: An elbow injury threatened to end his season before it started and Lambert was on a pitch-count almost the entire year. It is scary to think what he would have done had he been at full strength all season. Lambert was as dominant as a pitcher could be down the stretch and in the playoffs. The junior right-hander went 3-0 in the playoffs with a 0.00 ERA and 22 strikeouts in 19 1/3 innings. He threw a two-hit shutout in a 1-0 first-round win over Athens, stifled Southern Columbia's powerful offense and shutout Kutztown in states. The three-year starter, one of the district's best closers the last two years, went 7-3 with a 1.51 ERA and was a part of five shutouts. He allowed only 29 hits in 46 1/3 innings and struck out 65 while holding opponents to a .158 average. As soon as Lambert's elbow healed, Hughesville became one of the state's premier teams.

Second Runner-up-Dawson Fox, Muncy: One of the program's best players ever had one of its best seasons ever. The versatile senior played three positions and hit .523 while homering four times, driving in 29 runs and scoring 20. Fox hit safely in nearly every game, doubled 11 times and had a .603 on-base percentage. The four-year starter finished third all-time in Muncy career hits and RBIs and is fourth in doubles and games played. Fox also was strong on the mound, going 5-1 and striking out 37 in 32 innings. Fox (11-2) is Muncy's all-time leader in career winning percentage and also was a slick-fielding shortstop.

First Runner-up-Kyle Datres, Loyalsock: In addition to pitching so well, Datres was again a catalyst at the top of Loyalsock's lineup. Last year's O'Malley winner was outstanding in the playoffs and set the tone for Loyalsock in the state final when he hit a one-out, third-inning double to the right field wall. The major Division I recruit hit .400, scored 31 runs and drove in 13 more. He also belted six doubles, two triples and a home run. Datres also is an outstanding shortstop. He is fast too and runs the bases as well as anyone around, stealing bases that so few could, something he did throughout the postseason.

And the Winner is...Andrew Null, Montoursville: Null delivered a season-long performance that makes O'Malley proud, hitting and pitching as well as anyone in the district. Null was a force at the plate, hitting .455 while crushing an area-high seven home runs, driving in 31 runs and scoring 19 more. He had a .529 on-base percentage and is fast as he is powerful, leading the team with 10 stolen bases. A hard worker and five-tool threat, the junior also went 6-3 with a 1.40 ERA and struck out 61 in 48 innings while allowing just 30 hits. Null held opponents to two runs or fewer in seven of his last nine starters and was a first team HAC-I all-star as both a pitcher and infielder. Null was the MVP on a 16-5 team and was brilliant against Loyalsock in the district semifinal.

Second runner-up-Nick Grieco, St. John Neumann: Neumann lost six starters from a 10-man team last year and appeared in serious trouble. Grieco was one of the players who made sure the season became much more. The freshman pitcher went 4-3 with a 1.90 ERA and helped Neumann stay in the playoff hunt until the season's final days. Grieco also provided some solid offense and is a big reason the Knights (8-12) look like a major player in next year's District 4 Class A playoff chase.

First runner-up-Dawson Prough, Wellsboro: Do not be surprised if this freshman is a first team all-star the next three years. Talented and hard-working, Prough can do it all and helped Wellsboro go 15-5 while excelling in all areas. Prough hit .394 with eight doubles, a home run, 24 RBIs and 26 runs. He also stole 12 bases and was not caught while compiling a .468 on-base percentage. A good second baseman, Prough also provides pitching depth and can do for Wellsboro the next three years what Matt Reese did the last four.

And the Winner is...Marcus Bartlett, Montgomery: A year after playing JV baseball, Bartlett made a huge leap forward and became one of the most valuable players on a Class A district finalist. Bartlett emerged as the outstanding No. 2 pitcher Montgomery desperately needed, going 6-2 with a 0.98 ERA while throwing three shutouts and striking out 52 in 35 2/3 innings. He only allowed 15 hits and beat Class AA semifinalist Southern Columbia. Bartlett also was one of the team's best hitters and batted .333 with driving in 14 runs. Bartlett had four RBIs in two district playoff games.

Game of the Year

Second runner-up-Loyalsock 2, Montoursville 1: One of the best games these long-time rivals have ever played, Datres and Null threw gems in the district semifinal. The Warriors tied it in the top of the seventh but Robbie Klein's bases-loaded walk in the bottom half clinched the win and a state playoff berth.

First runner-up-Hughesville 7, Loyalsock 5: The Spartans were cruising to their first district championship before Loyalsock erupted for four seventh-inning runs and tied it on Datres's bold steal of home. Unfazed, Burkholder continued throwing well and Jason Stroup and Zach Fry had RBI ninth-inning hits as Hughesville made history.

And the Winner is...Loyalsock 5, Beaver 4: Bailey Young lived a young player's dream, hitting the walk-off single that lifted Loyalsock to the state championship win. There were three lead changes and three ties in this classic and Beaver tied it with two outs in the top of the seventh. Young drove in pinch-runner Caleb Robbins who made a mad dash for home as soon as Young made contact with the 0-2 pitch. Those who played in the game will never forget it. It was high school baseball at its best.