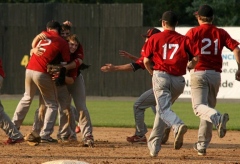 WILLIAMSPORT - After having their hearts broken three times in the last five years there was no way they were going down that road again this time.

Even after Montgomery got an early lead Canton didn't panic and played with a confidence that they had played with all season. They chipped away at Montgomery's ace Alex Worthington while their pitcher Garrett Wesneski shut down the Raiders. And, eventually, Canton had the big inning their fans could feel coming, which was more than Wesneski needed to give the Warriors an 8-5 win in the District IV, Class A baseball championship game.

It's the first baseball title in school history.

"We've been snake bit," Canton coach Bob Rockwell remarked. "But these boys, these boys have earned it. I'm just happy for the boys, that's what it's all about. It's about the kids and Canton, too. Little Canton bringing home a district title. That's pretty special."

After getting the loss last year Wesneski was excited to earn the win this time around.

"This is awesome," he said. "It was very nerve wracking, obviously. It's great to finally do it for Coach Rockwell, who's been here forever, our town, our fans that come out here. They come to every game ever since we were five years old playing in All-Stars and travel ball. They went everywhere with us. It's just awesome."

Coming into this game Wesneski wanted another shot at the Raiders.

"I said last week I want the ball in big games," he remarked. "I feel like I can carry our team and I know my defense, they always have my back. They make great plays."

Even when they were down Rockwell wasn't worried.

"We told them not to panic," Rockwell said about being down. "Just chip away and that's exactly what they did."

It was the bottom of the order coming through for Canton as seventh batter Wes Moore and eighth batter Chase Pepper combined for 4-for-7 with a triple, six runs and 3-RBI.

Kyle Landis also had a big day at the plate, going 2-for-4 with an RBI. Connor Route and Emmett Watson had one RBI each while Trevor Route scored.

Pepper went two innings to strike out one with two hits, four runs and one walk.

He got the start but struggled in the second inning giving way to Wesneski.

Much like last year's district championship between these two teams the junior held the Raiders at bay, going five innings to strike out five while allowing four hits, three walks and one earned run.

"We knew we had two good kids," Rockwell remarked. "We were hoping one or both of them would come through and Garrett did in the end."

Montgomery went down 1-2-3 in the top of the first with Canton threatening in the bottom half of the inning.

Watson led off with a single followed by Trevor Route reaching after getting hit by a pitch. Connor Route sacrificed them over followed by a walk to Wesneski to load the bases.

The Raiders dug in, though. On the next at bat Watson was thrown out at home to keep the clean sheet, followed by Josiah Bardo flying out to end the inning.

Montgomery flexed their muscle in the top of the second as Luke Forrestahl led off with a single followed by Corey Kriner drawing a walk. Both moved over on a pick off attempt to second that ended up in center field.

Marcus Bartlett brought Forrestahl in followed by Tony Cordon bringing in Kriner on a single to put Montgomery up 2-0.

Tony Goetz reached on an error that allowed Bartlett to score followed by Ray Farr bringing in Cordon on a fielder's choice to make it 4-0.

Montgomery had a chance to go up 5-0 as a hit off the bat of Worthington looked to score Goetz but Wesneski faked the throw to first then caught Goetz in a run down, eventually being tagged out at home plate. Jake Miller grounded out to end the inning.

"It was a battle," Moore said about being down early. "It was a struggle but we all knew we would pull through."

Canton retaliated in the bottom half of the inning as Wes Moore led off with a walk followed by Chase Pepper reaching on an error.

Tanner Machmer would strike out but the ball got away from the catcher Goetz and Moore scored to get Canton on the board.

Three batters later, Connor Route hit a sacrifice fly to center to bring in Pepper to cut the lead in half going into the third inning.

Cam McHenry led off the third inning with a double but was stranded on second as Wesneski garnered two strikeouts in the inning.

In the bottom half of the inning with one out Bardo walked, followed by Moore reaching on an error. They would be stranded on second and third, though.

Up to that point Canton had stranded eight base runners.

Wesneski kept Montgomery scoreless in the fourth while Canton continued to chip away. Down 4-2, Watson led off with a walk but after that things got controversial.

Trevor Route followed by hitting a line drive right back at Worthington. The pitcher appeared to make the catch but lost it on the transfer as he went to throw out Watson on first who ran to second. The throw went over the first baseman's head and Watson headed back to first.

Montgomery then threw to second for the force on Watson which was called by the second base umpire. Luckily for Canton, Trevor Route ran to first and stayed there, giving them a runner on still.

Connor Route would be hit by a pitch followed by Wesneski flying out.

With two outs Landis came through, hitting a single that brought in Trevor Route to cut the lead to 4-3.

In the top of the fifth Montgomery was able to generate some offense.

Miller led off with a walk followed by McHenry singling. Both would be moved over on the Forrestahl ground out.

Kriner then hit the ball to first but Connor Route was able to throw Miller out at the plate for the second out. However, it was Bartlett getting the two out single to drive home McHenry and make it a 5-3 lead. On the same play Kriner was caught in a run down and tagged out by Moore to end the threat.

The Warriors responded in the bottom half of the fifth in a big way as Moore led off with a walk followed by Pepper reaching on a single.

An error off the bat of Machmer brought in Moore followed by Watson's ground out bringing in Pepper to knot the game up at 5-all.

After they held serve on the defensive end Canton went back to work on offense in the bottom of the sixth. As the game went on and the momentum changed Rockwell felt they were due for a big inning, especially since Worthington began to tire after throwing a complete game against Sullivan County in the semi-finals and going over 100 pitches in this game.

"Once we started to get used to him we got a couple of hits," Rockwell said.

Landis led off with a single with Tim Bassett coming in to run for him. After a Bardo sacrifice Moore singled to bring Bassett home, giving Canton their first lead.

"It was crazy," Moore said about the hit. "I didn't even know where it went, I just swung and ran as fast as I could. Thank Tim for running so fast, too."

Then Pepper took the game by the throat, hitting a triple to center-left that scored Moore and broke the game open.

"It felt pretty good," Pepper said about the triple. "It gave our pitcher some cushion."

Moore was impressed with Pepper's shot.

Pepper focused on his fundamentals at the plate late in the innings to help pull it out.

"I was just keeping my head down," he said. "We've been practicing pretty hard, taking the swings you needed."

Montgomery made it interesting in their final at bat as they loaded the bases with one out. However, Canton finished the game in dramatic fashion as Trevor Route caught an infield bloop and doubled off the runner at first to end the game.

Then the celebration began.

"That was tough," Wesneski said about the last inning. "I told Rockwell before I was going out there I was going to try bringing it. I just couldn't find it and the few strikes I thought were strikes all night he just didn't give me. I just had to pray that my defense made a play and Trevor did."

Players and coaches rushed the field while the fans in the stands cheered loudly, especially the several Canton area Little League baseball teams in attendance.

"That's another thing, we were happy to have the kids here in support," Rockwell said about Little Leaguers. "That's how they build memories. These guys are their heroes and that's how you keep a program going."

"He's a competitor," he said. "He still was battling. That kid is tough."

As for their next game Canton won't do anything different.

"Were just going to do the same thing we've been doing," Rockwell said. "We go to practice, we work on the things we need to work on and try to play relaxed and roll the dice. See what happens."

As for the players, they're happy that on Rockwell's fourth try in five years they came out on top.

"It feels great," Moore remarked. "He deserves it more than anything."