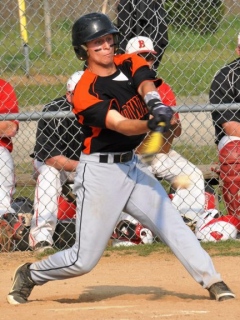 WYSOX - All season long Tristan James has been Towanda's most dependable arm but on Tuesday the sophomore took another step forward in his development.

"Every time I go out there I expect to do well, to hit my spots and never give up," he said.

James allowed just two hits and one walk while striking out 10 showing those outside the NTL just how good he could be.

"It's the best feeling in the world," James said about throwing a shutout in his first district start. "I spot my pitches well. To come out here in front of half the town. This was probably the biggest game I've ever pitched. I was thinking about this game all day. It's all I was thinking about."

His coach Bill Sexton was impressed with his performance.

"I thought Tristan had a real good game for us," Sexton said. "The line he put up tonight was particularly impressive. Any time you throw a shut out its impressive. You can't ask for much better than that."

James needed to pitch well as the Bloomsburg pitcher was equally effective.

"There pitcher was throwing the same game to us," Sexton said. "We were doing a little bit better in terms of hitting him."

It was a pitcher's duel through four innings. Towanda had runners in scoring position in the bottom of the second and third but couldn't bring them around while James was perfect on the other end through four.

Bloomsburg threatened in the fifth with a 2-out walk followed by a single put runners on the corners but the Knights got out of it with a ground out to second base.

In the bottom half of that inning Towanda finally broke through. With one out Richard Benjamin walked, then was replaced by Ethan Barto on the base paths. Barto then reached third off a Mitch Patel single.

It was an important hit as up to that point it was only Towanda's second hit of the game.

"It gave me confidence and I think it gave the whole team confidence," Patel said. "It was a pretty good hit on my part. When one kid hits, other kids want to hit. I wanted to do my part and get a good at bat."

A fielder's choice by Brandon Dinelli brought Benjamin in to put the Knights up 1-0.

In the top of the sixth Bloomsburg went down in order but in the bottom half Towanda kept the offense going.

Nick Place hit a one out single with courtesy runner Ty Fowler reaching second on a wild pitch. Austin Markel came up and drew a walk to put runners on first and second with one out.

After another out was recorded James helped himself, hitting a 2-out single to right center that brought home Landon Brown, who came in to run for Fowler.

"I saw the pitch well and tried to muscle it out there," James said about the run scoring single.

That gave Towanda a 2-0 lead going into the seventh, more than enough for them to hold.

In the final half inning Bloomsburg led off with a single but a fielder's choice and two strikeouts later sent the Knights to the second round.

"I'm not going to lie, the nerves were running very high," James said. "Once I got the 3-2 hitter looking, I knew I could lock down the last kid and end it."

After a disappointing year last getting a win at home felt good for the Knights.

"It feels very good," Markel, a senior captain, said about advancing. "Last year we were knocked out in our first game. It was very important to me. It's our last home game. It's the last time I will play high school baseball on this field."

Patel, James, Place and Jared Lines had the four Towanda hits with Lines' a double. Dinelli and James knocked in the two runs.

Sexton liked what he saw from 7-through-9 batters James, Benjamin and Patel.

The Black Knights will now travel to top seed Loyalsock on Friday with a 4:30 p.m. start.

"They are very good," Markel remarked. "We will see a very good pitcher. We are not nervous. We will be ready to play on Friday."

"It's exciting," Patel added. "We just have to keep working hard."

Sexton isn't worried about seeding, he only cares how well his team is playing going into Friday's game.

"We have to play the type of game we played tonight," he said. "This is high school baseball, whoever goes and plays a solid game is going to win. Seeds don't mean much of anything, what you're doing now matters. All that matters is playing well at an important time."