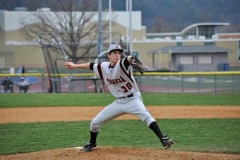 ATHENS - It was a trio of sophomores who helped lead the Towanda Black Knights to a 3-1 victory at Athens on Thursday in a battle of teams that were unbeaten in NTL East play.

Tristan James threw a four-hitter for the Black Knights, allowing one unearned run, walking two, hitting one batter and striking out 10.

At the plate fellow sophomore Dylan Bates had a hit and scored a pair of runs, while another sophomore, Nick Place, had two hits and an RBI in the victory.

In the third inning Towanda added to the lead as Lines walked, moved to second on a wild pitch, moved to third on a sacrifice off the bat of Bates and scored on a Place single.

Athens got a run back in the bottom half of the inning as Dan Fisher reached on an error and Curt Moore singled and Fisher scored on an error off the bat of Neil Carpenter.

In the seventh Towanda added to the lead as Bates reached on a strikeout and an error allowed him to advance and he scored off a fielder's choice hit into by Sawyer Strope.

Along with the two hits by Place, Bates, Lines, Markel and Strope all had hits in the game for Towanda.

Athens got two hits from Stag Shadduck, one a double, and Curt Moore and Fisher had hits.

"It wasn't the prettiest game, we still continue to make mental mistakes and physical mistakes, but we are getting better," Towanda coach Bill Sexton said. "The one real consistent thing tonight was Tristan on the mound. He threw a really fine game. He had a low pitch count in the fifth and sixth innings and I thought he deserved a chance to win the ball game. He did a nice job. He gave up the leadoff double in the seventh then settled right down.

"He's a solid pitcher. He was a solid pitcher last year at the JV level, we got him in the varsity game in the second half and he did a nice job. It's not easy being the starting catcher and a pitcher, but he's doing a nice job. Anytime you get a 10 strikeout, two walk, one hit batsman night, that's a good night. There is no doubt about it, this was a crucial game tonight for us."

After homering in back-to-back games, Place came back today with a two-hit effort.

"He's another sophomore that is stepping up at the varsity level this year," Sexton said. "He was a varsity starter last year, he had a decent year, but he's been solid this year for us. Last night he came through with the power bat, tonight he had two soft hits, but they were hits in key situations."

A 1-0 Wyalusing lead after three, the Rams scored 15 runs in the final four innings to get the win.

Wyalusing took a 4-0 lead into the bottom of the fourth, before Sayre got on the board to make it 4-1.

After Wyalusing made it 8-1 in the top of the fifth, Sayre answered with three runs to make it 8-4, but Wyalusing added six in the sixth and two in the seventh of the victory.

Isaac Bennett had a hit and scored a run for the Rams and Cody Pickett scored three runs for Wyalusing, while Andrew Pickett had four hits and scored four runs.

Chad Johnson had two runs scored in the game and Kyle Tinna had two doubles and scored two runs, while Jordan Salsman had two hits and scored a run.

Dylan Otis had a hit and scored two runs, Shane Salsman had a pair of hits and scored a run and Hunter Brewer had a hit in the game.

Jake Wheeler scored twice for Sayre and Kyle Lake had a hit and a run scored.

Nick Skerpon had a hit and scored two runs and Gabe Nobles had a hit, while Dave Mendola had three hits.

Nick Hall had a hit, J.P. Harbst had two hits and Cody Ketter had a 4-for-4 day with a triple, a double and two runs scored.

Skerpon started on the mound for Sayre and Mendola and Lake also pitched in the game.

Peter Simmons went the distance on the mound, striking out 10, walking three and allowing three hits and one unearned run, while hitting one batter.

At the plate Carter Jackson had a three hit day with a home run, three runs scored and four RBI.

Jake Howland had a hit and scored two runs, Simmons had a hit, a run scored and an RBI and Travis Moyer and Adam Leyman each had two hits.

Moyer scored two runs, had a double and two RBI and Leyman had a triple, a run scored and an RBI.

Tioga is at Newfield on Monday.