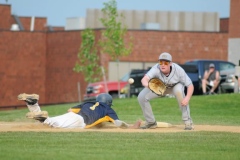 Mason Peters hit the first pitch of the game out of the park, then Tyler Behrent hit a three-run shot three batters later.

Mansfield fought back, cutting it to 5-3 after the top half of the second.

Southern would get them back over the next two innings with both teams going scoreless in the second half of the game.

Hillson, Rotella and Derek Burd knocked in the runs.

Rotella went the rest of the way, allowing just one hit while striking out one.