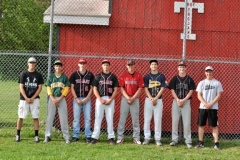 It was a very good year for area baseball and that made for some tough choices when it came to picking this year's The Daily and Sunday Review All-Region team.

The Canton Warriors reached the state final in Class A this year, after winning their first district title, and they are well represented among the major award winners, while Towanda captured the NTL East crown and Nick Place earns this year's All-Region Player of the Year honors.

Place was a force at the plate, hitting over .400 with an area high seven home runs this year. He also emerged as one of the Black Knights top pitchers this season as he helped the Black Knights become one of just three teams to beat Canton on the season.

In the district playoffs Place hit a three-run home run and pitched a strong game on the mound, as the Black Knights dropped a tough 4-3 game to eventual state champion Loyalsock in Class AA.

After reaching the state final Canton earns a number of the top awards as Chase Pepper and Garrett Wesneski share the pitcher of the year honors, while Emmett Watson is the defensive player of the year.

Pepper and Wesneski were co number one starters for the Warriors all season long and they alternated starts throughout the postseason run.

When one of the two did have a ball put into play Watson was usually able to track it down in centerfield.

Canton head coach Bob Rockwell, and assistant Lyle Wesneski, are the coaching staff of the year after guiding Canton to the state final.

In New York the Waverly Wolverines won the Section 4, Class B title and for his efforts Dylan Perry wins the silver slugger award as the offensive player of the year.

Perry hit .410 with 36 RBI and 30 runs scored for the Wolverines this season to earn the offensive player of the year honor.

Dawson Prough emerged as one of the top players for the Wellsboro Green Hornets as a freshman this year and he is the newcomer of the year.

Waverly's Patric Bronson and Cody Marchese are on the first team, along with Sayre's Nick Skerpon, Towanda's Tristan James and Mansfield's Taylor Hillson.

Gold gloves are given out for the top defensive player at each position and the winners in the outfield are Watson, Cody Pickett and Manuel, while Hillson gets the honor at shortstop, Shaw at catcher, Markel at first base, May at second base and Matt Lee of Waverly at third base.

Heinrich gets the honor as a pitcher.