Tioga holds on over Edison. 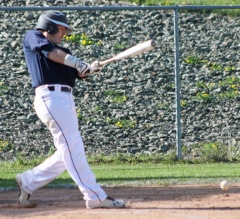 TIOGA CENTER, N.Y. - Last time Tioga took on division powerhouse Edison they jumped out to a big lead only for the Spartans to rally back and win.

This time the Tigers held on.

Tioga took a 7-1 lead after two innings only to see it evaporate when Edison scored five runs in the sixth to cut it to a 10-8 Tioga advantage.

The Tigers would get one back in the bottom half of the inning and hold Edison scoreless in the seventh to secure the win.

"These boys had now never beaten them," Tioga coach Bob Seymour said about Tioga's win. "It was a nice win for them and Jesse (Manuel), he keeps amazing me every time he takes the mound."

Manuel went the distance for the win, striking out eight while allowing no walks, 14 hits and seven earned runs.

Up just by three Manuel was strong in the final inning.

This is Tioga's first win over Edison since 2010 and it also keeps them alive for a division title.

Jake Howland led the way at the plate, going 3-for-4 with two runs and an RBI while Adam Layman (2-for-4) and Travis Moyer (2-for-4) also had multiple hits in the game. Layman added an RBI.

Adam Perry scored twice while Dakota Skinner and Zach Baker each crossed home once with Baker adding an RBI.

Tyler Troccia led Edison with a 4-for-4 day which included a 2-run home run.

Brandon Michaud went the distance for the loss, striking out six while allowing three walks, 10 hits but only five earned runs.

In a night with a lot of offense the Tigers pulled out the NTL cross-over baseball win Wednesday.

Wyalusing scored three in the top of the first to take a 3-0 lead but Mansfield countered with five in the second.

The Tigers would add six in the third to go up 11-3 but the Rams fought back, scoring six in the fourth to cut it to 11-9.

The Tigers added three between the fifth and sixth innings to take a 14-9 lead into the final frame. Wyalusing came back again, scoring four, but couldn't send the game into extra innings.

"This is a big win after the loss last night," Mansfield coach Matt Perry said. "We rebounded well. We played pretty good against a good hitting team in Wyalusing."

Brady Andrews went 3-for-4 with three runs scored to lead the Tigers while Taylor Hillson (2-for-5) and Sam Rotella (2-for-4) also had multiple hits in the game. They scored twice as well.

Max Colegrove was 2-for-4 with a double while Blake Doan was 1-for-3 with three runs scored.

Hillson started with Bo Burleigh coming on in relief. He would eventually pick up the win as he was relieved by Andrews. Zaparzynski came on late to earn the save.

Pickett earns the loss with four strikeouts and three walks.

The Green Hornets scored nine runs right off the bat as they picked up an NTL cross-over baseball win Wednesday.

Dawson Prough and Connor Coolidge both went 2-for-3 while Prough had 4-RBI and Coolidge two. Nick Tremper (2-for-2) and Luke Rudy (2-for-3) also had multiple hits in the game.

Dan Saniga started and earns the win. He went two innings, striking out four and issuing no walks. Joe Allen pitched the next three with one strikeout and one walk.

Austin Saxer earns the loss for the Panthers while Gesier, Ford and Joby Leiser also saw action on the mound.

Wellsboro will travel to Mansfield Friday.

Tanner Machmer went 3-for-3 with a run scored to lead Canton at the plate while Connor Route (3-for-4), Emmett Watson (2-for-3) and Josiah Bardo (2-for-3) also had multiple hits in the game. Bardo's included two triples.

Garrett Wesneski, Kyle Landis and Jacob Butcher also had hits and scored once.

Chase Pepper earns the win, going all five innings with eight strikeouts and no walks.

Nick Skerpon had a 2-run double for the Redskins while Cody Ketter, Kyle Lake, David Mendola and Mike Rogers also had hits.

The Wildcats picked up an NTL cross-over baseball win Wednesday.

Tyler Melko had a 2-run home run for CV along with a single while Luke Plummer had two doubles and Brandon Whitesell had a double and single.

Ryan Freeman had a hit as well.

Plummer started followed by Melko and Chris Seymour on the mound.

The Wolverines pounded out 13 hits en route to their IAC baseball win Wednesday.

Alex Uhl had a hit with a run scored while Dylan Perry scored twice with an RBI. Colton Miller scored with Anthony Girolamo knocking in a run.

The Wolverines are now ranked eighth in the state for Class B. The only other ranked team from Section IV is Oneonta.

The Crusaders pounded out 12 hits as they picked up an IAC baseball win Wednesday.

The Cardinals led 4-3 after two innings but Notre Dame went on to out score them 11-1 over the next five.

Parker May went 4-for-5 with two runs scored while Sam Bruner (2-for-4) and Aaron Carson (2-for-3) also had multiple hits in the game. Bruner scored four times while Carson scored twice.

May went the final inning, striking out two with no walks, two hits and one earned run.