Towanda locks up at least share of NTL East title. 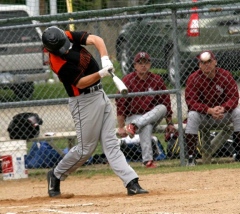 WYSOX - The Black Knights picked up a 13-0 victory over Northeast Bradford on Wednesday to clinch at least a share of the NTL East title on Wednesday.

Nick Place had two home runs in the victory and four Towanda pitchers combined on a one hitter.

Place was 2-for-3 with two runs scored, four RBI and the two home runs, giving him seven on the year.

Towanda got two first inning runs as Dylan Bates got a two-out single and Place hit a two-run home run.

In the second James singled, Ty Fowler came in to run and Mitch Patel doubled. After an out was recorded, Jared Lines singled home two runs and Bates singled home Lines, who had gone to third on a two-base error. Place hit his second two-run home run to cap the scoring.

In the third the Black Knights got two runs on an error and Towanda capped the scoring with four runs in the fourth.

"I was pleased with the way we came right out and scored runs," Towanda coach Bill Sexton said. "We scored two in the first and five more in the second and tacked on runs in every inning and eventually turned it into a 10-run game in five innings, which is what we need to do and should do.

"We gave ourselves a share of the league title tonight with winning, but obviously you don't want to share with anybody. We need to take care of business on Friday and start playing well. It's time to win the league outright if we can and get ready for the postseason."

Brandon Dinelli had a hit and scored a run and Lines had a hit, two RBI and a run scored.

Matt Bartholomew had an RBI and Bates was 3-for-4 with two runs scored and two RBI.

Jesse Stroud had the hit for the Panthers.

Towanda is at Wyalusing on Friday and Northeast Bradford hosts Athens.

WYALUSING - Andrew Pickett broke a 3-3 tie in the sixth with a two-run home run and the Rams ended up with five runs in the sixth inning to put the game away.

Chad Johnson had a double in the game and Cody Pickett scored a run. Andrew Pickett had the home run, two RBI and two runs scored and Kyle Tinna had a hit and scored two runs.

Cody Pickett went the distance on the mound for the Rams, striking out two in the game.

Kyle Jackson started on the mound for Troy in the game.

The Rams host Towanda on Friday and Troy is at Sayre.

The Wolverines scored three first inning runs, but Edison battled back for the victory.

With the loss Waverly's lead in the division shrinks to 1/2 a game over Notre Dame, with the Crusaders hosting the Wolverines today.

Saxon and Cooney had two hits each in the game and Marchese, Bronson and Matt Lee had hits in the game for the Wolverines.

Kyle Kuzma pitched for the Wolverines, striking out four, walking one and allowing five hits and four earned runs.

Brandon Michaud struck out two, walked one, and allowed three runs on seven hits for Edison in the game.

Newfield took a 4-0 lead in the second inning and led 7-2 entering the sixth before the Crusaders fought back for the win.

Notre Dame got four runs in the sixth to cut the deficit to one and in the seventh Joe Prunier led off with a walk, stole second and moved to third on a ground out by Kyle Metzger.

After another out, Sam Bruner had a base hit up the middle to tie the game. Bruner stole second and on the throw to second there was an error moving Bruner to third. The center field made a throw back toward third and threw the ball into the dugout allowing Bruner to score.

"It's a wonderful quality," Notre Dame coach Bill Hopkins said of being able to come back. "We don't like to be in the position as often as we've been

Bruner had two hits, an RBI and two runs scored and Parker May, of Ridgebury, had two hits in the game.

Hunter Thomas had two hits, a double, an RBI and a run scored and Aaron Carson had three hits, with a triple and three RBI.

Tyler Boyles had a hit, Prunier had a double and three runs scored.

Metzger had a double, an RBI and a run scored and Kyle Minchin had a hit and scored a run.

Prunier started for the Crusaders, Boyles got the win and Thomas got the save.

Micky Beach took the loss for Newfield and Xavier Baker had two hits in the game.

The Tigers got a complete-game effort on the mound from Peter Simmons in the victory. Simmons struck out seven, walked none and allowed eight hits, all singles, and one unearned run in the game.

"He did a nice job and we had a couple double plays behind him when he did give up a couple singles," Tioga coach Bob Seymour said. "He came out strong for us."

Jake Howland had two hits, with a double, two RBI and a run scored and Jesse Manuel had a hit and scored a run in the game.

Ryan Vergason had two hits, an RBI and two runs scored and Simmons had a double and two RBI.

The Tigers are finished for the regular season. They play at the Spencer Van-Etten wooden bat tournament on May 18, but that game doesn't count toward sectional seeding.

The Griffins got five runs in the fourth inning to rally from a 5-3 deficit to beat Millville.

Kelby Mullen had two hits, a stolen base, an RBI and a run scored and Zach Meyer had a hit and two RBI.

Colton Fry had two hits, with a stolen base, Tom Blasi had an RBI, a run scored and a stolen base and Connor Wylie scored a run.

The Griffins host Bucktail for a doubleheader starting at 11 a.m. on Saturday.

ATHENS - The Redskins got six runs in the fourth inning on their way to the victory on Wednesday.

Athens jumped out to a 4-0 lead after three, but Sayre got six in the fourth, two more in the fifth and three in the seventh to pick up the win.

Cody Ketter had two hits in the game and Kyle Lake had a hit for Sayre.

Felt had three RBI, and Skerpon had two RBI, while Kochin, Mendola, Hall and Wheeler all had RBI.

Troy Stivason had a hit and scored a run for Athens and Cure Moore had three hits, with two triples, and four runs scored in the game, driving in one run.

Craig Moore had a hit in the game and Matt Fisher had a hit, while Mike Estes had a hit and scored a run.

Craig Moore started for Athens, while Keir pitched for Sayre.