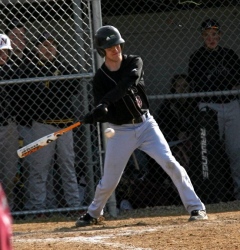 LERAYSVILLE - The first couple weeks of the season Northeast Bradford showed promise on the baseball diamond but were unable to break into the win column.

Then on Saturday, at their Christiansen Tire Tournament, they broke into the win column in a big way.

In the opening round they got the bats going to beat Susquehanna 13-6 then in the title game they stayed hot at the plate as they defeated Williamson 11-5 to win the championship.

"I'm pleased with the outcome," Northeast coach Brian Pifer said. "We had kind of a hiccup in the first game but they're gaining confidence and that's the exciting part of it.

The Panthers pounded out 27 hits between the two games, led by tournament MVP Aaron Pifer, who went 6-for-8 with 4-RBI and three runs scored.

"We hit the ball very well," remarked Pifer. "And we played some defense. We turned three double plays in the first game and in the second game we turned one. The defense is playing well."

In the opener against the Sabres Northeast jumped out to a 8-0 lead in the first four innings.

Susquehanna roared back in the fifth, scoring all six of their runs to cut the deficit to 8-6.

The Panthers rallied with three runs in the fifth and two more in the sixth to secure the win.

Ford, Horton and Cody Clark had doubles in the game while Nik Geiser and Adam Ford also had hits.

Pifer had 3-RBI in the game while Smith, Clark and Emick had two each. Horton, Adam Ford and Morris each drove in one run.

On the mound Horton started and earned the win. He went four innings with one strikeout and allowing one hit.

Jeremiah Harvey pitched the last two innings, striking out one with one hit.

Then in the title game the Panthers jumped out early, scoring two runs in the second and third to take a 4-0 lead.

They made it 8-0 with four runs in the fourth while in the bottom half of the inning Williamson scored twice to cut it to 8-2.

Northeast made it 10-2 with two more runs in the fifth.

The Warriors tried to rally late, scoring one run in the sixth and two in the seventh but it wasn't enough.

Pifer went 4-for-4 to lead Northeast with two runs, a stolen base and an RBI with Derek Newman going 3-for-4 with a run scored.

Smith and Horton also had hits, with Smith scoring once and Horton scoring twice with two stolen bases.

Despite not getting a hit Emick scored twice, stole two bases and drove in three runs.

Morris scored and drove in a run while Bryan Ford also scored.

Geiser earned the win, going five innings to strike out one while allowing one walk, four hits and two runs.

Harvey went the final two, striking out two with one walk, five hits and three runs.

Troy Adriance led Williamson, going 3-for-4 with two runs while Kyle Colegrove (2-for-3) and Anthony Bastian (2-for-2) also had multiple hits in the game.

Daltyn Confer went 1-for-2 with 2-RBI and a double while Billy Barnes had an RBI. Colin Heilbrun scored a run.

In Williamson's opening round game they defeated Sullivan County 18-2.

Bastian had two hits, including a double, with two runs scored while Matt Learn, Adriance, Confer and Wyatt Gorg had hits.

Colegrove earned the win, striking out seven with three hits in four innings of work.

For Sullivan Jake Gavitt and Robert Hoffman each had a hit and scored a run while Colton Fry had a hit with an RBI.

The Griffins lost to Susquehanna 12-9 in the consolation game.

Taylor Baldwin led Sullivan, going 3-for-5 with two runs and an RBI while Gavitt (2-for-5) and Hoffman (2-for-5) also had multiple hits in the game.

Stephen McElhaney had a hit with a run scored while Conner Wylie scored a run and drove one in.

Colton Fry went the distance in the loss striking out nine.

"Our young players, they have a lot to offer," said Pifer. "We're looking forward to the rest of the season."

The Warriors scored six runs in the first two innings to pull out an NTL baseball win Saturday.

Wellsboro cut it to 6-3 with three runs in the third but Canton scored three more in the seventh to put it away.

Garrett Wesneski went 3-for-4 with a triple and three runs to lead the Warriors while Connor Route was 2-for-4 with a double.

Travis Butcher pitched one inning with one strikeout then Chase Pepper went the final three for the save. He struck out five with one earned run.

For the Hornets Dawson Prough went 2-for-4 with a triple and run scored while Brandon Owlett was 2-for-2 with a run. Nick Tremper went 1-for-3 with a double.

Dylan Prough pitched the next three, allowing just one hit and two walks with one strikeout.

Mansfield led 2-1 after the first inning but they were all knotted up at 3-all heading into the third.

The Wildcats took a 4-3 lead in the third then added to it, eventually going up 6-3 in the top of the sixth before Mansfield came back.

On the mound Levi Adams started and went three innings to allow seven hits and four earned runs. Shaw went the next three and picked up the win, striking out one while allowing three hits, two walks and two earned runs.

Zaparzynski threw the final inning and recorded the save.

Troy Stivason went 3-for-4 with 2-RBI to lead the Wildcats while Dan Fisher (2-for-4) and Zane Vargason (2-for-3) also had multiple hits in the game.

Vargason scored twice while Fisher scored and drove in a run.

Stivason came on for 1 2/3-innings and earned the loss. He allowed two hits, three walks and three earned runs.

Mansfield is at Troy Wednesday.

The Redskins picked up a non-league baseball win Saturday.

They got two runs in the third and fifth innings, then the game winner in the sixth.

In the top of the seventh Millville had bases loaded with two outs when Sayre's Derrik Keir got the strikeout to earn the save and secure the win.

The three combined for seven strikeouts.

They beat Shamokin 14-10 in the consolation game after losing to Upper Darby 10-6 in the opener.

In the first game Troy was down 6-4 when they got runs in the fourth and fifth to knot the game up at 6-all. Upper Dauphin would then score four runs in the seventh to get the win.

Kyle Schucker went 2-for-3 with his first career home run, a double and 3-RBI to lead the Trojans.

Isaac Havens adn Jarrod Mattocks each had two hits, an RBI and a run scored.

Ethan Calkins finished out with one strikeout.

In the consolation game Troy jumped out to a 10-0 lead in the first inning but Shamokin cut it to 10-9 before the Trojans eventually pulled away.

Brandon Mattocks led off the game with his first career home run. He went 3-for-4 and was a triple shy of the cycle while knocking in three runs.

Smith went 3-for-4 with three runs while Kyle Jackson and Jed Wright had two hits each. Jarrod Mattocks, Collin Binford and Mitchell Morse also had hits.

Wright had 2-RBI while Binford also knocked in a run.

Jackson started and went the first 1 2/3-innings. He was followed by Mattocks for a 1/3-innings, with Reeves next for 2/3-innings with a strikeout.

Binford would go 1/3-inning with a strikeout and get the win.

Calkins went the final four innings with a strikeout and earned the save.

Troy is at Canton for a non-league game Monday.

Wyalusing went 0-2 at the tournament on Saturday.

They fell 2-0 to Central Columbia in the opener, then lost 11-5 to Mifflinburg in the consolation game.

In the first game Central got a run in the first and second innings while holding the Rams to five hits.

Ridge Williams went 3-for-3 while Dylan Otis was 1-for-2 with a double. Collin Edsell also had a hit.

On the mound Cody Pickett earned the loss, going the distance to strike out seven while allowing one walk and four hits.

In the second game Mifflinburg jumped out early, scoring four runs in the first and two in the second to take a 6-0 lead.

Tinna's included a double while Salsman had 2-RBI.

Dawson Otis, Pickett and Zack Zeidner also had hits. Pickett scored a run while Zeidner knocked one in.

On the mound Devon Carr started and earned the loss, going four innings to allow three walks and 11 hits. He struck out five.

Dylan Otis went the final three, striking out one while allowing three walks and four hits.

The Rams travel to Wellsboro Wednesday.

Waverly fell in a non-league game played at Cooperstown on Saturday.

Peyton Miller and Collin Traub had the only two Wolverine hits in the game.

On the mound Dylan Perry started and earned the loss, going three innings to allow seven hits and four earned runs with one strikeout.

Colton Miller went the next two with three hits, three walks and three earned runs while striking out two.

Alex Uhl went the final two, allowing one hit while striking out two.