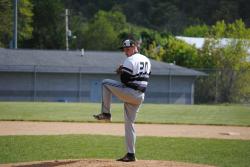 Jennings struck out five and allowed one hit.

Jennings also had a triple at the plate and Marc Felt, Luke Newman and Joe Horn had hits.

Nate Sweet threw a four-hitter for Sayre, striking out six.

Caleb Fitzwater tossed a one-hitter for the Indians in the victory.

At the plate Fitzwater had two hits and scored a run and Kurtis Easton had three hits, with an RBI and two runs scored.

Connor Calaman had two hits, with a double, two RBI and two runs scored and Wynn Doan had a double, three RBI and a run scored.

Chris Lingle scored a run and Christian Kemp had two hits and an RBI.

Garret Smith had the Panthers' hit and scored their run.

The Black Knights got a walk-off win over Canton on Wednesday.

With the game tied in the bottom of the seventh Brayden Manchester led off with a single.

Brett Crispell came in to run for Manchester and after an out was recorded, Luke Tama and Caleb Lines walked to load the bases. A strikeout was recorded, and with two outs and a 3-2 count Shane Martin singled home Crispell with the winning run.

"It was a nice win for us tonight," Towanda coach Bill Sexton said. "We played a competitive game last night and came up on the short end of it. We played a competitive game tonight and came out on the long end of it. The kids battled, we came out, got down 3-0 and Shane (Martin) struggled with his control right off the bat. He threw real well at CV last week and tonight he struggled with the strike zone. But, he didn't quit. He didn't hang his head. He played good defense in the outfield and came up big for us. I'm really pleased for him.

"I was really pleased with Caleb Lines. He came in with no warmup and did a really nice job. I was pleased with Brayden Manchester, he came in today and threw two solid innings for us, then Lars (Thomason) came in, threw a good inning for us and got the win. We did the things tonight you have to do to win games. We played some good defense tonight. We turned two double plays, and (Keegan) Kisner ran down a long fly ball at the fence."

Thomason had an RBI and scored a run and Martin had two hits and three RBI.

Kisner, Bartholomew and Manchester had hits and Crispell and Troy Pierce scored runs.

Canton got two hits and three runs from Brendan Landis and Jeremiah McClinton and Mason Martell each had hits. McClinton scored a run and Martell had an RBI.

Kaden Martell had two hits, an RBI and a run scored and Bryce Cole had a hit, while Ethan Landis and Michael Smithers had RBI.