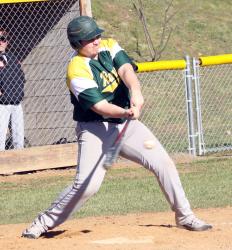 In the eighth inning the Green Hornets came through again, coming away with a 10-9 win.

In the bottom of the eighth with a 2-2 count and the bases loaded and Larry Walters at the plate Wellsboro did the safety squeeze play, scoring Nick Tremper for the walk-off win.

"It was a typical rivalry game, both teams played hard," Wellsboro coach Philip Prough said. "One takes a big early lead, the other scraps back and that's what you expect from a rival game. Mansfield played hard, they didn't roll over and quit. In the bottom of the eighth inning with J.P. Shaw, who is a really good pitcher, we were patient and resilient enough to give ourselves a chance to win in extra innings.

"I'm proud of our kids for our comeback and a win in a big rival game."

The win was the 50th of Prough's coaching career.

Tremper was 3-for-4 with three RBI and two runs scored and Johnny Rowland had two hits and he scored a run.

Dawson Prough had a double and Dalton Prough and Walters each had hits.

Mansfield got three hits each from Carl Dinger and Joel Whitteker, and Whitteker had an RBI.

Wellsboro is at Canton today.

WYALUSING — The Black Knights got a strong pitching performance from Lars Thomason in the win.

"He really minimized the damage out there. He worked out of some big jams. He really seemed to get stronger as the game went on."

Thomason and Shane Martin each had two hits at the plate, while Keegan Kisner, Ryan Bartholomew and Tyler Bidlack had hits.

Tama made a huge play defensively to end the game as he dove full extension to snag a liner at short stop for the final out of the game.

Jon Morrison, Isaac Bennett and Chandler Brown pitched for Wyalusing, striking out four between them.

Bennett had two doubles and scored a run and Ridge Williams had a hit and two RBI.

The Wildcats scored six runs in the first inning of the win.

Ryan Kennedy scored a run and Justin Reagan had a hit and two runs scored.

Cody Jennings had a hit, an RBI and a run scored and Nate Bradley scored two runs.

Cory Stivason had a double, two RBI and a run scored and Nate Kennedy scored a run.

Troy got two hits, with a double, and a run scored from Kyle Schucker and Nathan Swain had a hit and scored a run.

Nate Martin had a triple and three RBI. Martin has six extra-base hits this week.

The Panthers scored four runs in the fifth and four in the sixth in the win.

Brian Horton had a double and scored two runs and Nik Geiser had a hit, two runs scored and an RBI.

Derek Newman had three hits, a run scored and three RBI and Nate Watkins had a hit, three runs and two RBI.

Horton had a complete-game six-hitter, striking out five.

Williamson got doubles from Wyatt Gorg and Jon Daley.

Hunter Sackett scored two runs and Colin Heilbrun had a hit and scored a run.

Learn, Sackett and Jared Stermer struck out four between them.

The Indians got six runs in the fourth and fifth inning to rally from a 5-1 deficit for the win.

Colton Vinluan had a double and a triple and scored two runs and Jace Bieser had two hits and a run scored.

Tyler Melko had a hit and Christian Kemp had a hit and scored a run. Nick Vasco, Wynn Doan and Nevin Stiles scored runs, while Matt Freeman had an RBI.

Mason Martell had two hits and an RBI for Canton and Brendon Landis had two hits, an RBI and two runs scored.

Kaden Martell had two hits and two RBI and Silas Binford had a hit, while Ethan Landis scored a run.

Vinluan, Bieser and Caleb Fitzwater struck out seven for CV.

Edison got three runs in the fifth to break open a 3-2 game on Friday.

Josh Knolles had two hits and scored a run and Mason Salsman had a double and a run scored.

Brendyn Stillman had a hit and two RBI. Dylan Cooney scored a run for Waverly.

Tyler Croft struck out one in a complete-game for Waverly.

Lucas Shultz and Jared Houck pitched in the loss.

Tioga scored eight runs in the seventh to blow the game open in the win.

Parker Hendershot was 5-for-6 with three runs, three RBI, two doubles and a triple and Pierce Hendershot had three hits, three runs and an RBI.

Mitchell Taylor had two hits, three runs and an RBI and Tanner Folk had two doubles, three RBI and a run scored.

Taylor struck out four in four innings as the starter and Pierce Hendershot struck out three in three innings.

Mitch got his first varsity win," Tioga coach Bob Seymour said. "We had a little trouble with his control at first, and Pierce came in and was great too. After Mitch settled down he was on a roll. We've got Jesse, Parker and Mitch now, so we are ready for Waverly on Monday.