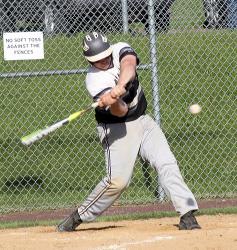 The Tigers were able to edge Athens 6-5 on the baseball diamond.

The win keeps Athens from clinching their fourth straight league title. Now North Penn-Mansfield is just one game back in the loss column with two to go.

If Athens beats Towanda and Wyalusing, their final two left on the schedule, they will clinch.

It was back and forth early with the Tigers up 2-1 after the first inning but Athens taking a 3-2 lead after the second.

Both teams scored two runs each in the third to make it 5-4 Wildcats.

North Penn-Mansfield then got runs in the fourth and sixth to pull ahead for the win.

Brendan Hill went 3-for-4 with two runs to lead the Tigers while Joel Whitteker had a double, run scored and an RBI.

Dinger started and went 4 1/3-innings for the no decision. He struck out two while allowing seven hits, one walk and five runs, three of them earned.

Hillson finished out for the win, striking out one while allowing one hit.

For Athens Marc Felt (2-for-4) and Ryan Kennedy (2-for-4) both had multiple hits on the day. Felt's included a double with a run scored and an RBI while Kennedy also crossed home.

Daniel Joyce and Joe Horn each had a double as Luke Newman and Cody Jennings hit singles.

Newman, Horn and Kaden Rude all scored while Newman, Joyce and Horn each knocked in a run.

Cody Jennings started and went 4 1/3-innings for the no decision. He struck out five while allowing six hits, two walks and five runs, two of them earned.

Nate Kennedy went two-thirds of an inning to strike out one and walk one.

Matt Collins finished out and scored the loss, allowing two hits and one earned run.

Bailey Cohick scored a run, hit two doubles and drove in two to lead Troy to their 3-1 victory over Towanda on Wednesday.

For Troy, Tyler Williams had two hits, including one double, and one RBI, Clark Jackson had a hit, Kody Schucker and Nick Call each had one run and one hit.

For Towanda, Lars Thomason and Dawsan Manning each had one hit, Ryan Bartholomew finished with a double, Preston Rogers scored a run and Rickey Smiley had two hits, including a triple, with an RBI.

LaBadie started for Troy and pitched six and two thirds innings, allowing one run, none earned, on three hits and striking out seven. Mason Bellows pitched the last two thirds of one inning and allowed two hits and no runs.

Troy Pierce started for Towanda, allowing three runs, two of them earned, on seven hits and striking out two in six innings of work. Keegan Kisner pitched the final inning for Towanda, striking out one and allowing no hits or runs.

For CV, Caleb Fitzwater had two runs and two hits, Jace Bieser and Wynn Doan each had one hit, Christian Kemp finished with two runs, two hits, including one double, and one RBI, Corey Wells added one hit and one RBI and Seth Huyler had one double.

Caleb Fitzwater started for CV, he struck out four and allowed six runs on six hits in three innings of work. Chris Lingle relieved him for the last four innings, he allowed three runs, two earned, on four hits and four walks.

Nate Watkins had four hits, three runs and four RBI to lead NEB to their 12-2 win over Sugar Valley on Wednesday.

For NEB, Clayton Connor had one hit and an RBI, Nate Chilson finished with a hit, run and RBI, Tyler Devonshire finished with two hits, one run and two RBI. Roland Phytila added two hits, including a double, and one RBI, Derrick Newman and Ian Wilbur each had a hit and a run, Nick Vrabel, Garret Smith and Grant Allis each added a hit and two runs and Max Cooper scored one run.

Tyler Devonshire pitched for NEB. He struck out 10 batters, walked three and allowed one run on one hit in four innings of work.

Saturday NEB takes on Towanda at 10 a.m. at Towanda and then Cowanesque Valley at home at 3 p.m.

Mike Wilcox went 2-2 with a double, two runs and a walk to lead Wyalusing to their 8-7 win over Wellsboro in local baseball action on Wednesday.

Taynton Repard started for Wellsboro, allowing seven runs, six earned on four hits in one inning. Davis relieved him for three innings and allowed one run on four hits and struck out four. Prough pitched the last three innings, allowing no runs on two hits and one strikeout.