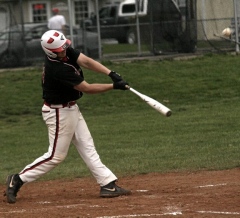 The Mansfield Tigers shut down the Athens Wildcats on Friday night, dropping the Wildcats into a tie atop the NTL Division I baseball standings.

J.P. Shaw threw a three-hit shutout for the Tigers, striking out six in the victory.

At the plate Brendan Hill had two hits for Mansfield and Bryce Zaparzynski, Shaw, Zach Kriner and Joel Whitteker had hits. Whitteker's hit was a double and Kriner had an RBI, while Shaw and Whitteker scored runs.

Nathan Tice had an RBI for Mansfield.

Tyler Forbes pitched four innings for Athens, striking out seven, walking one and allowing three hits and Sam Perri struck out one, walked one and allowed one hit in three innings.

Nick Vosburgh, Forbes and Perri had hits for the Wildcats in the game.

Athens and Troy are now tied atop the NTL standings.

EAST TROY - The Trojans scored two in the fifth and one in the sixth to break a 1-1 tie on their way to the win on Friday.

With the victory, along with Athens' loss to Mansfield, the Trojans are tied atop the NTL standings.

Isaac Havens had a double, an RBI and a run scored for Troy and Kyle Schucker had a double and an RBI.

Brock Schucker had a hit and Chance Lantz went 3-for-3.

Collin Binford had a hit and an RBI and Dane Smith, Jarod Mattocks and Brandon Mattocks scored runs.

Kyle Schucker struck out five in four innings on the mound and Havens got the win, striking out four in three innings.

Ethan Barto had two hits, with a double, for Towanda and Keegan Kisner had a hit and scored a run.

James struck out three in five innings for Towanda and Troy Pierce pitched 1/3 of an inning, while Bates pitched 2/3 of an inning with a strikeout.

"It was a good ballgame, unfortunately they came out on the winning side," Towanda coach Bill Sexton said. "We needed to get hits in a couple of situations and unfortunately we didn't."

Troy is at Mansfield today and Towanda hosts Wyalusing today.

Clayton Tymeson and Tyler Cole combined on a two-hit shutout for Canton.

Tymeson struck out one in three innings and Cole struck out two in four innings of the win.

John Bowman had a hit, an RBI and a run scored.

Bryce Cole had two hits, an RBI and a run scored and Mason Martell had a hit and an RBI.

Anthony Bastian and Nick Sargent had hits for Williamson.

Hunter Sackett started on the mound for Williamson.

Canton is at Neumann at 4 p.m. on Tuesday.

The Green Hornets got two hits, with a grand slam and five RBI, from Dawson Prough in the victory.

Dalton Prough, Nick Levindoski, Joe Allen and Caleb Tennis all had hits for the Green Hornets in the game.

Dylan Otis, Ridge Williams, Isaac Bennett and Chandler Brown each had hits for the Rams.

Wellsboro is at Towanda on Monday.

Three Sayre pitchers combined on a three-hit shutout in the win.

Nate Sweet and J.P. Harbst each had home runs in the win.

Harbst had a three-run home run and Sweet had a two-run home run, and added two more RBI.

Jake Wheeler had two hits, with a double, and scored three runs and Jordan Rockwell scored a run.

Matt Williams had a hit, a run scored and two RBI and Connor Hanafin scored a run.

John Esposito had a double and scored two runs and Sam Wheeler had a double, an RBI and a run scored.

Colton Vinluan and Tyler Melko combined to strike out five for CV.

Cam Reid had three hits, but it wasn't enough in the loss.

Reid had a double and an RBI and Parker May scored two runs.

Matt LaBadie had a hit for Notre Dame and Dan Sterns had a hit, while Gary Raupers scored a run.

The Tigers pounded out 20 hits in the win.

Parker Hendershot had four hits, with a double, and scored three runs and on the mound he struck out six in five innings with a walk and two hits and one run allowed.

Adam Zwierlein struck out none and allowed a hit and a run in two innings on the mound.

Jesse Manuel had three hits, with a double, two RBI and three runs scored and Adam Layman was 4-for-4 with two runs, two RBI and a double.

Jake Evanek had two hits, with two runs, a double and three RBI and Lucas Richardson was 3-for-3 with a double, two runs and two RBI.

Tioga is at O-M on Monday.