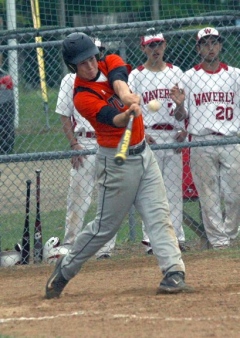 WYSOX - Towanda baseball led Waverly 1-0 the whole game, but the Wolverines scored three runs in the top of the seventh to pick up the 3-1 win on Friday.

Gavin Bennett limited Towanda to two hits and one run, striking out four in the win.

Kyle Kinsley had a hit and two RBI and Mike Girolamo and Bennett had hits.

Place had a double and Bates had a hit and an RBI, while Luke Tama scored for the Black Knights.

"I thought it was a good ball game, certainly a game we had a chance to win," Towanda coach Bill Sexton said. "We found a way to lose it, unfortunately that's the way we've gone a lot this year. It was a real good start out of Place tonight, four solid innings for us, he also had good at bats. He doubled to get that first run in the first inning and I thought Bates had a quality at bat behind him to drive him in. We couldn't get the bats going anywhere else, it's also a season long problem. It's a lot of cases of kids overmatched, at some point we have to get better. We have to learn from the experience and hopefully progress and get better at what we are doing."

Waverly will play Newark Valley in sectionals on Tuesday, while Towanda is done for the season.

The Redskins got two hits, three runs scored and five stolen bases from Jake Wheeler and Jordan Rockwell had a hit, a stolen base and he scored three runs.

J.P. Harbst had a triple and scored a run and Sam Wheeler had a hit, an RBI and scored three runs, with two stolen bases.

John Esposito had three hits, a double and two runs and Marshall Felt had a double, a stolen base and a run scored.

Ryan Murrelle started on the mound for Sayre.

The Green Hornets trailed early and gave up six runs in the sixth of the loss.

Nick Levindoski had two hits for Wellsboro and James Mundy and Dawson Prough pitched in the loss.